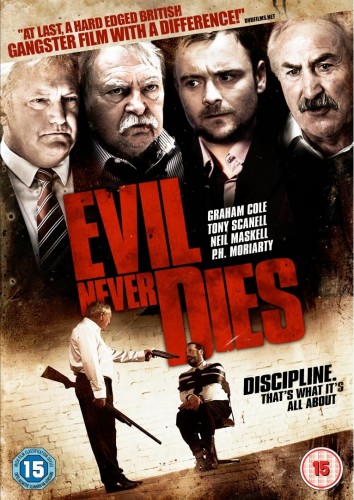 Harry Payne, a reformed gangster, has retired to the country town Norfolk just in time for a slew of disturbing, occult-related murders.

Harry Payne (Tony Scannell) has just served ten years in prison for the murder of his boss and best friend, Eugene McCann (P.H. Moriarity). Judging by all the tremulous, violent flashback sequences, you’d guess that Harry’s still—well—haunted by his past. “I lost everything when I pulled that trigger,” he says. And it’s true: not only did he land in the Big Time, he scarred himself emotionally, and drove his wife, Susan (Katy Manning), batty.

His wife’s condition is part of the reason he’s moved to the country town Norfolk. She’s there and he wants to live near her. He’s also long dreamed of owning his own pub. Well, now he does (amazing what you can accomplish from a prison cell, isn’t it?). But rural life isn’t what it’s cracked up to be for Harry. There are certain kinds of people in Norfolk, heavily made-up, drunk types, singing “Hey DJ, hey DJ,” who wander into forests and get disemboweled with scythes.

Could it be the same demons from Evil Dead committing these murders? No, it’s just the Sam Raimi “ram-o-cam” technique being ripped off for the six-hundredth time.

Payne has a bad reputation in town. It’s not surprising, then, that local law enforcement, headed by Inspector Bracken (Graham Cole), suspects him of these scythe murders. Bracken fails to recognize, though, that Harry’s more of a baseball bat and .38 type. The scythe . . . that sounds more like a weapon for a freaky local legend come to life—the White Lady of Rayleton, maybe. Oh . . . what do you know?

Did I mention Harry Payne is psychic? Well, he is.

The best thing about The Haunting of Harry Payne: it runs a mere 73 minutes. The worst thing: those 73 minutes feel like a purgatorial eternity.
The flick’s not all bad, though. Don’t get me wrong. The make-up effects are good and grotesque. Tony Scannell gives a well-conceived performance. Enough that we don’t need all the jarring flashback sequences to explain his character. Scannell is a good enough actor, conveying all he needs with facial expressions and line delivery. They don’t skimp on those flashbacks, though. No-oh. And each one is more loud, visually manipulated, and annoying than the last. 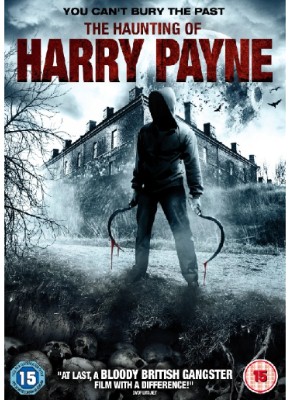 Really, the atmosphere is the movie’s strongest asset; budgetary constraints be damned, The Haunting of Harry Payne has an effective, dark vibe. Everything’s foggy and damp. Every character looks pallid, depressed, gritty. And the slasher movie-influenced perspectival camerawork—you know, seeing the victim through the predator’s eyes—that whole thing—makes for some good, creepy scenes.

It’s unfortunate, though, that this atmosphere is wasted highlighting a convoluted mess. It only takes about fifteen minutes to realize the Robert Ludlum-style pacing is being used for a terribly simplistic—and underdeveloped, ill-conceived, hackneyed—plot. It’s supposed to be a character study with some freaky occult killings tacked on, isn’t it? Why, then, is it cut like The Bourne Identity?

And Harry Payne’s character, despite the good acting, is totally unbelievable: brutal in his past, humane in his present. Why, Harry Payne has undergone a sea change! He’s performed a correctional three-sixty. He’s nice now! Come on. Don’t you want an archetypal, born gangster, who has reformed, but has weaved his past violence into his present sense of self? The kind that says, yeah, I did it. So what? And not the kind that says, I could really use some psychotropic drugs right now; I’ve been a horrible person—my poor wife. The old Harry we see in the flashbacks and the new Harry are simply too disparate for us to buy into, and thus, sympathize with. 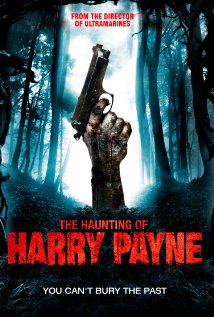 Its genre-bending is uneven, too. Is it a gangster movie? A slasher movie? A ghost story? A murder mystery? A psychological thriller? It has no postmodern nudge-nudge-wink-wink to effectively weave these different genres and sub-genres together. It leaves you saying: pick a trope, already! Leave genre deconstruction to Quentin Tarantino and Takashi Miike!

Overall, The Haunting of Harry Payne spreads itself too thin; it tries too hard to be more than it is. Like the Firesign Theatre said: how can you be in two places at once when you’re not anywhere it all? And it’s so cold and takes itself so seriously. How about a moment of levity? Jeez. I’d recommend this movie to masochists only—and patient ones at that.