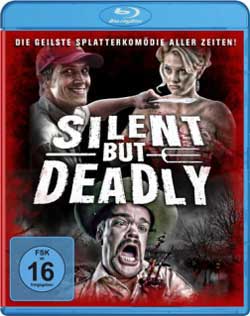 Thomas Capper is an unconventional and mysterious serial killer who takes aim at a Hollywood film set, by unleashing his own brand of retribution on the cast and crew.

One of the taglines for this movie was – Boobs and Blood…’Nuff said – and this is pretty much a perfect summary of the film Silent But Deadly. Indeed, a pair of boobs comes out in under a minute of screen time and I can’t think of a single female character that doesn’t ‘get em out’. Plus there’s gore a-plenty, against humans and animals alike, but I’m not too sure that this makes Silent But Deadly a decent horror film. It focuses much more on the comedy aspect of the film, making everything silly and ridiculous, rather than actually aspiring to scare people. I’d be tempted to liken it to a parody film such as Scary Movie even, as opposed to one which just used humour slyly to poke fun at itself, like Scream. It turned violence into something which wasn’t sinister, but instead more cartoon-like and literally could be taken directly from an episode of Itchy & Scratchy. 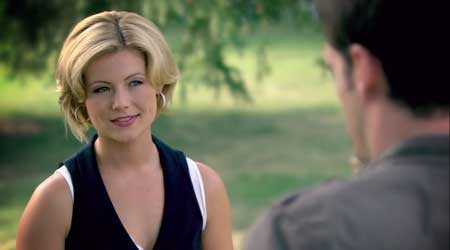 On the gore side of things, it was all CGI which looked fairly dodgy at times, and always obvious and cheap. This only furthers to enhance the comedy of Silent But Deadly and it really highlights the relative cheapness of the film. Ultimately, it’s a ‘tongue-in-cheek movie that’s supposed to take the piss as opposed to tackling real and terrifying issues. But there is a real energy to the film which is immediately inviting, especially as it means that not a single minute is wasted as pointless ‘filler’. Plus, the acting was decent all round which helped to recover some of the realism that was lost due to the CGI.

The story of this one about a rather disturbed individual called Thomas, who decides to unleash revenge first upon his family, then anyone who just happens to get in his way. He never speaks, apart from to name what weapon he’s about to clobber you with, and the only thing that calms him is spending time with his goat. The moral of Silent But Deadly is essentially to ‘not mess with his goats’, because throughout the film it is the harming of the goat which causes Thomas to get mental and kill you. He ends up on a film set as an assistant to the director, whilst a couple of police officers investigate the murders which took place at his former house (with a female documentary filmmaker in tow!). As usual, the police officers are bumbling fools who take ages to come even close to the killer, partly because their countryside lifestyle means that not much happens in those parts and partly because they’re always bickering between them as to the best way to go about it.

Silent But Deadly takes the basic ‘serial killer’ sub genre and turns it on its head a little bit. It gives its serial killer really weird motivations behind his actions, especially that he prefers the companies of goats to women. I thought the ending was specifically hilarious though when he escapes the mayhem and goes to hitchhike a ride out of there. What vehicle does he happen to stumble across? A truck transporting goats to the slaughterhouse. Perfect. 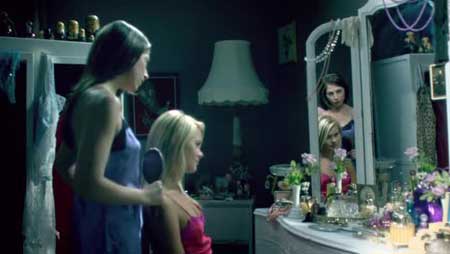 Basically, don’t come to Silent But Deadly hoping for many scares but instead as almost a parody of the horror genre. There’s a whole host of amusing relationships featured throughout and many comedic elements thrown together which work moderately well – a man with two mail order Russian brides who turned out to be lesbians, a midget sheriff with his resentful deputy and a fixation on finding semen, a stressed out director who will hire anybody just to get him a proper cup of coffee (which matches the colour on his chart!) and the brutal decapitation of an innocent goat (twice), leading to angry revenge by the main protagonist. Silent But Deadly gets straight into the story, and, whilst it may not be one that is unique, a different spin has definitely been put on it which is what makes Silent But Deadly the crazy film that it is.