Home | Feast Your Eyes and Gobble up ThanksKilling 3

Feast Your Eyes and Gobble up ThanksKilling 3 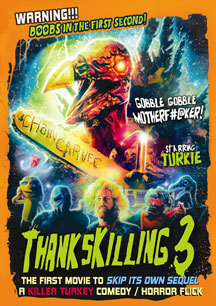 The “Raunchiest Puppet Movie Ever Made”*, ThanksKilling 3, debuts for the first time on DVD this October just in time for the holidays. The comedy/ horror spoof sees the return of original creators Jordan Downey and Kevin Stewart to the cult slasher series that follows Turkie, the fowl-mouthed Thanksgiving villain.

The original ThanksKilling was made for the minuscule budget of $3,500 while Downey and Stewart were still in college. After years of marketing it themselves, and with the help of distributor Gravitas Ventures, the film went on to gain a massive cult following for its purposeful “so bad it’s good” vibe. It quickly rose to over 170,000 ratings on Netflix and was featured in Maxim Magazine, Fangoria, and on TMZ. The movie’s Facebook page, with over 10,300 likes, features fan made puppets and artwork, theme song remixes, and even pictures of ThanksKilling related fan tattoos.

Using the fan-base to their advantage, Downey and Stewart were able to raise over $100,000 on Kickstarter to make their ambitious follow up, ThanksKilling 3 – the first movie ever to skip it’s own sequel! Currently the highest funded horror film on Kickstarter, this ridiculous concept is something you have to see to believe.

ThanksKilling 3 follows the feathered villain Turkie as he carves through the likes of a rapping grandma, a mindless puppet, a wig-wearing inventor, a bisexual space worm, and their equally ridiculous friends on his quest to recover the last copy of ThanksKilling 2.

Filled with R-rated puppets and NSFW humor, ThanksKilling 3 stars Dan Usaj and Joe Hartzler, with an appearance by P*rn star Wanda Lust. Also featuring the voice talents of SickAnimation.com‘s own Marc M and the team behind Slick Gigolo, Bridge Stuart and Mike Litzenberg. Highlighting the technical qualities of the film is the impressive electronic soundtrack from composer Zain Effendi which is currently available on iTunes.