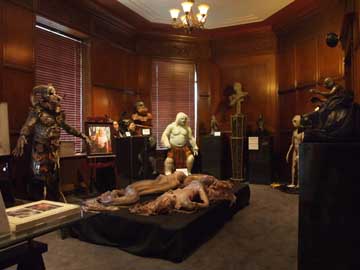 The gallery, which is open to the public on weekdays from 8:30 a.m. to 5 p.m., showcases makeup pieces and props from professional artists and special effects firms as well as work from up-and-coming artists who graduated from the school. In the center of the wood-paneled space, two pieces by sculptor Brent Armstrong pay tribute to Pierce.

Pierce, who was the first ever makeup department head at Universal Studios, is well-known in the special effects community for his iconic and inspiring monster designs, including the title monsters from The Mummy and The Wolf Man, and, perhaps most notably, Universal’s film adaptation of Frankenstein. For that film, Pierce worked on actor Boris Karloff, designing a look with a flattened head and protruding neck electrodes that became the definitive version of the character.

At the school’s dedication ceremony, makeup historian and Below the Line contributor Scott Essman gave a detailed presentation on Pierce’s life and work, drawing from his book, Jack Pierce: The Man Behind the Monsters. Visitors then had the opportunity to tour the gallery and school, where they were treated to work by present day makeup and effects luminaries like Steve Wang, Joel Harlow and Leonard Engelman.