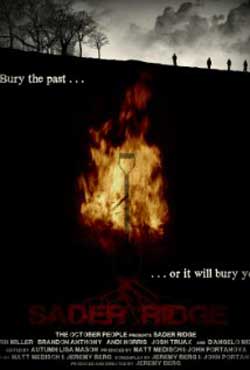 For years Samantha has wondered about where she came from. After inheriting a house from the family she never knew, Sam and three friends take a road trip to inspect the remote property. Soon after Sam arrives old memories come seeping back to her subconscious while jealousy and unspoken tension between the friends is forced to the surface. As relationships unravel, so does Sam’s sanity. She soon finds herself unable to tell the difference between reality and the horrible visions of brutality she can’t escape. While her world crumbles, Sam discovers that the current horrors may be tied directly to her past.

Ah, the good ol’ ancestral home. One of those horror tropes that just never seem to get old. And if you happen to inherit one of these, you might want to think twice. Unfortunately for our characters, they haven’t seen many horror movies.

Sader Ridge falls into this subgenre and when you deal with a movie like this, you hope the filmmakers can come up with some new twist on the age old tale, even if it is a small one. Heck, it doesn’t have to be a twist, per se, but maybe a different kind of approach to the tale. Thankfully we have that here. Sader Ridge, while not perfect, manages to do more right than wrong.

Shot for an estimated eleven thousand, it’s safe to put Sader Ridge in the low budget category. But the way the film is shot, it stands out from the rest like it. Give credit to our director, Jeremy Berg, for the cinematography. Going for the muted color look, the film has a depressing, cold, detached feeling. Perfect for the plot. Which is what, exactly?

Sam, lucky girl, has just found out she’s been left a home by her aunt. Problem is she has no idea that the house existed, let alone that once upon a time when she was very young, she lived there with her parents.

So a road trip is in order. Off she goes with her ex boyfriend, Mark, and her friends Caitlin and Roman. When they finally arrive, they are greeted by the caretaker, Eric, a friendly if somewhat quiet and strange young man, who offers to show them the house and grounds.

He instantly takes a liking to Sam, no wonder as he tells her that back when they were young and she lived here, they were the best of friends. Of course Sam doesn’t remember, and would like to know more. Too bad Eric would rather drop clues than be straightforward. Frustrating for Sam, no surprise for us viewers. We need to have a movie, after all. But have no fear, Sam starts to find out for herself the events that led to her leaving Sader Ridge. 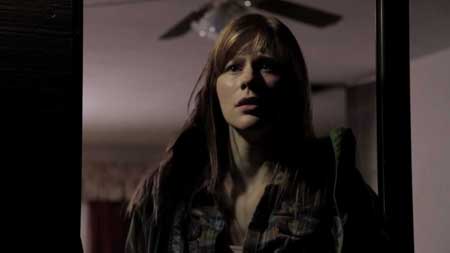 I’d have to say that I liked Sader Ridge, but not everything clicked for me. Having said that, they’re more minor quibbles than anything. First off, it’s not too hard to guess where the story’s going. Admittedly there are a few surprises on the way, but seasoned horror fans will have seen enough of the ancestral home subgenre to know how most of the plot will unfold.

Now I know what you’re thinking. Every horror movie is like that. And I agree, but when you slow the pace of the movie down so that you can, bit by bit, peel back layers of the story, it’s tough for the viewer to stay interested. Thankfully the performance from D’Angelo Midili saves the day.

As the caretaker, Eric, he alone holds the mystery of the past, and it is through him that we get what information we can. D’Angelo plays him as distant, vacant, yet with a fair amount of intelligence. You know there’s something not right going on in his head. He honestly makes this movie easier to sit through. As for the others, well, not as good. At times it seemed like the lines were a little too rehearsed. 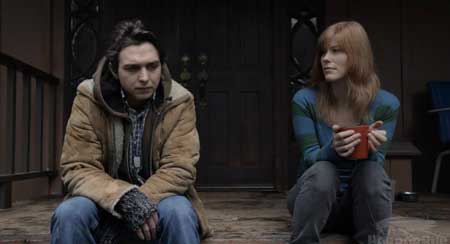 Director Jeremy Berg did a good job considering the budget. The choice of locations was an excellent one, but I did wonder why all of the different shots of trees. I know the symbolic reason, but I’m not sure there had to be as many. Like I said, minor gripes.

In the end, I’d recommend Sader Ridge but with caution. It can be a little slow, the acting can be a little silly and melodramatic, and at times you’ll wish that Eric would just hurry it up and spill the secrets he knows. But those faults aside, if you like your horror on the soft, quiet side, with a little bit of mystery, Sader Ridge might be for you. 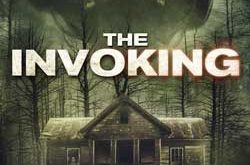