Home | One Sheet And Trailer For GRABBERS Will Grab You

One Sheet And Trailer For GRABBERS Will Grab You

You guys are gonna love this one.

Caught wind of a new creature feature heading our way titled GRABBERS and I simply love the artwork: 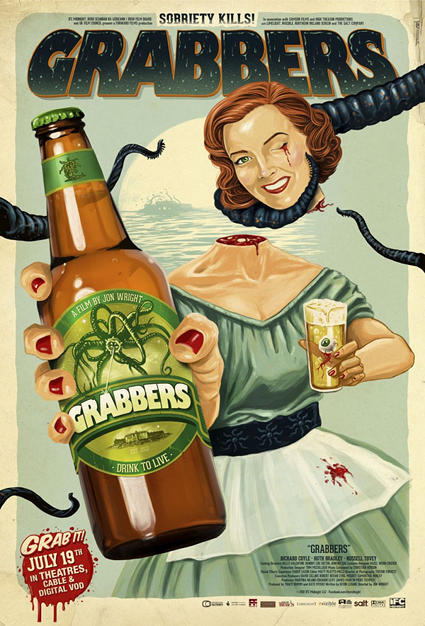 Coming at us on July 19th from IFC Midnight on VOD and limited theatrically this one looks to be a ton of fun.

Synopsis:
Ciarán O’Shea, the handsome though washed up policeman of sleepy Erin Island, has a daily routine consisting mainly of hanging out at the pub with the local drunks and various other charmingly eccentric characters. But his day is about to go horribly wrong.

Teamed up with the unwanted help of Lisa – an uptight workaholic policewoman from the Irish mainland – they suddenly find themselves dealing with dead whales, decapitated fishermen and weird alien creatures or “grabbers”. Like a giant squid with tentacles, fanged jaws and a three-foot barbed tongue, they’re making mincemeat of the locals.

Faced with another imminent attack, O’Shea and Lisa figure out that the only person to survive the last onslaught only did so because he was so drunk his blood was literally toxic to the monsters. So there is only one thing for it: They have to get the entire village as drunk as possible in order to survive the night … a task that the villagers apply themselves to with gusto.

But one person must remain sober so for the first time in years O’Shea has to face up to things without a drink. When things don’t go to plan, an extremely drunk Lisa and a very sober O’Shea have to reconcile their differences and somehow save the day.

Starring Richard Coyle, Ruth Bradley, and Russell Tovey I think this might be one to add to that every growing “must see” list.

Here’s the trailer to peak your interest: