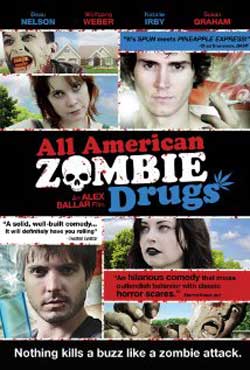 Vinny and Sebastion, two burnouts, going nowhere in small town suburbia and still riding the high of their high-school days, start a business doing the only thing they have ever excelled at…drugs. With the help of a jealous girlfriend and a rich goth chick, Vinny and Sebastion take on the mob, angry, geeky, frat-boys, and zombies in the search of the perfect high.

Well, I did it..I sat thru a full fledged drug-film toting the zombie genre on its back. This little dandy arrived complete with zombie mints, so my snack tray was a little fuller for the experience. “All American Zombie Drugs” is a weird film. It’s comedy that “sort of” takes a Beavis-and-Butthead-using-live-actors approach. The cohorts are Vinny and Sebastian who in addition to Sebastian’s girlfriend Kara (Susan Graham) spends every waking moment high (or getting high). The excessive use of acid and cocaine doesn’t really sing “say no to blow” to sensitive viewers, but in the interest of cinema its purpose is to play on a “Dumb and Dumber” routine featuring a bunch of losers who are on the verge of being evicted.

Sebastian (Beau Nelson) seems to have issues with falling asleep when he is high instantly breaking out into a simulated sex romp fueled by his pimp filled imagination. Vinny (Wolfgang Weber), the mellower one usually just watches life go by as he takes another hit of his bong. The idea here is that the numbskulls come up with a business plan to sell more dope and start a franchise (or something). Now by this point in the review you are probably wondering where are the zombies? Ya same here….

The group is later joined by a 4th drug indulger aka wealthy Goth chick (Natalie Irby) Melissa who becomes their new source of business financing. She is definitely the most dynamic of the group with an eye for business and a need for “speed” (or coke for that matter).

Directed by Alex Ballar, it was clear to me that this film is meant to hold a cult-like appeal to it. Honestly I’m just not a fan of drug movies myself. They can be stupid and funny, but the message sent goes against my grain on what we should be expressing. Now zombies are just fine, as long as their is zombies in them.

Calling this film a roller coaster ride is not that far off base as it changes its direction several times from drug comedy to zombie horror into culty nonsense that ends up embellishing its own charm (there..it finally won me over)

While the characters here are initially a bit annoying they do grow on you ending on a note that tends to win one over before calling it a night. No, my initial concerns here were soon over shadowed by a bit of comical abusiveness that is so over the top in drug nonsense that it ends up working itself out by the films end.

The aspect of zombies is indeed a part of the film but at the same time is not the entire film. More so we are brought on the amusing journey of a pair of dimwits, a girlfriend and a Gothy entrepreneur that gels into its own creation.

Actress Natalie Irby really feels at home here sporting Goth wear thru most of the film. Her warming smile as character Melissa is a nice contrast to her sassiness as the more intelligent one of the group who’s funds are just enough to launch their first business outing. 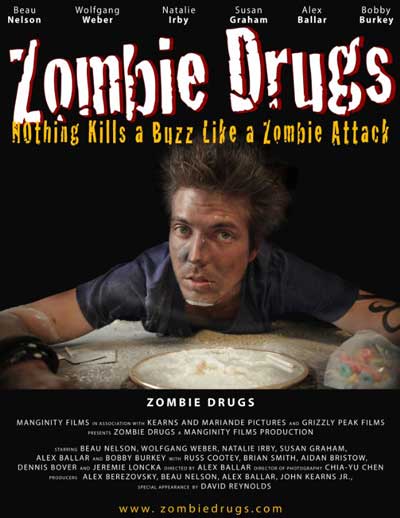 Humor in this film ranges from forced to subtle as the characters over act at times and then embrace their naive actions that include experimental cat litter-created drugs found on the Internet. It’s almost an urban legend in itself that aspires from the school of Beavis and Butthead.

Originally introduced under the single title of “Zombie Drugs” the film later was embellished with the moniker of “All American Zombie Drugs” which come to mind is a bit more appealing than its former 2 word title. 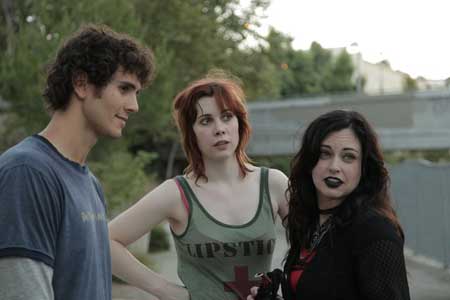 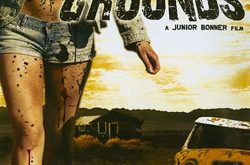 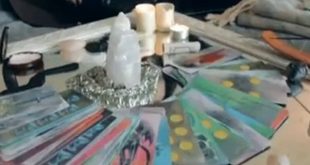 Zombie Drugs: Nothing Kills A Buzz Like A Zombie Attack!