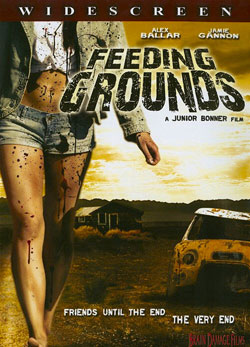 A young group of friends head out to a cabin in the desert. Something has landed in the desert and it needs to eat…

“Feeding Grounds” is one of those films that really leaves me on the fence. On one hand, the film really has a lot going for it and on the other hand it becomes so frustrating that you can’t decide whether or not to like the film or hate it. There are some interesting ideas and some really strong acting by a cast of unknowns that helps sell the material but there were so many loose ends within the story you just seem to get fed up with it at certain points, only to be drawn back in, and the cycle goes on throughout the films runtime. A lovely young couple leaves their motel early in the morning only to find a mysterious stranger looking for a ride.

They refuse and head out to the desert where they become engaged and seem happy. Later that evening , their behavior has become erratic and they are at each others throats. When they pull over, they each become sick and our mysterious stranger returns. The next day we meet a group of twenty somethings on their way to a desert cabin for the weekend. On their way, they find abandoned cars everywhere. They eventually pull over to kill some time until they can get in to their cabin. After they find a human ear, they head off only to find themselves becoming sick, bit by something. Their behavior becomes erratic, at each other’s throats, and no body knows the secret that lies within the desert.

And neither does the audience, nor do they ever know exactly what is going on. There is a very strong attempt at developing characters and, for the most part, it works. At times these characters get to be a bit annoying but you do care what happens to them and the group of young actors that encompass the roles do a very strong job, especially when things begin to get tense after they grow sick. One character, the vegan girl, she never becomes infected. There is a line of dialogue that tries to explain it but since we never know what is attacking them or causing this, the explanation just didn’t work for me. There is a lot of bickering and a backstory about the four guys being a band that had broke up.  There is plenty of this stuff but it just didn’t really work for me. The film, for me, starts to work during the last twenty minutes then it was just over with no real payoff.

Where the film does excel is in its cinematography. There is some really stunning shots in the desert that help set the mood of the film. Though I was underwhelmed by much of the film, the material was handled with confidence by Junior Bonner. I may have to watch this film a second time. There may be more going on than meets the eye. The makeup effects looked good, but there was very little to see. We see a creatures claw, it looked nice but I’m still frustrated by the lack of explanation.

I love the idea of the less that we see, the scary it can be when using your imagination but in this film it just wasn’t working, I am going to recommend “Feeding Ground”. This movie is pretty interesting even though it is frustrating at times. The acting is really good and this group should be seen. When things start to heat up they really turn on the juice and the character scenes work really well. Maybe some body else will find the lack of a creature more interesting than I.

My main problem is the mysterious stranger at the beginning that seems to set the events of the film into motion never appears again. Don’t take my review to seriously, check this one out, especially if you are a hardcore horror fan. This one is interesting.

Get this with 3 other releases on the: MIDNIGHT HORROR COLLECTION: ROAD TRIP TO HELL 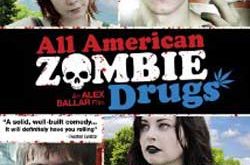 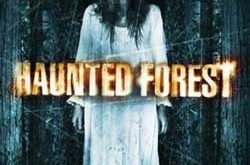