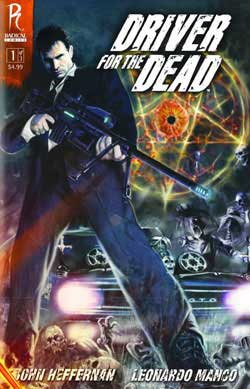 Radical Publishing always put a smile on my face as they constantly introduce new and exciting titles. The latest which I’m looking over is 1 of 3 on a new series titled ” Driver for the Dead”. Now to quickly describe what Driver for the dead is too take bits of “Constantine”, “Supernatural TV series” and Transporter and role them into a tale about a man who deals with life’s dirty work. Namely taking out unwanted spirits, transporting the dead and using his skills to deal with the kinds of stuff we only read about elsewhere. Alabaster Graves, lives a modest lifestyle…nothing fancy, just the basic essentials.

Though this job for a local mortician is far deeper than just taking coffins to there destinations. He gets his hands dirty with battling dark spirits, witches and all sorts of underworld leaks in our world. As the story begins, a very powerful African American specialist called Moses Freeman is on route to exorcise a powerful demon from a young boy.

Though even with his knowledge of voodoo, hexes and the black arts this visit proves to be even too much for his old and tired spirit. He cleans house on the demons infecting the boy, but has to battle for his life as nasty snake-filled specters come rushing out and overpower Moses in the process.

Alabaster had been notified and instructed to pick up his body. Graves takes on each job with a confidence and almost everyday attitude, but its clear that what he sees is not everyday stuff. The issue is created by John Heffernan and Leonardo Manco. Manco does a bang up job with exciting pencil work and inking that makes this series even better to look at. The whole team has ramped up to the plate in what I think for me will be my favorite series of there releases. To be honest, I’d love to see this one take to film as it has a bit of that “Ghost rider” element to it as well. Cool beans!