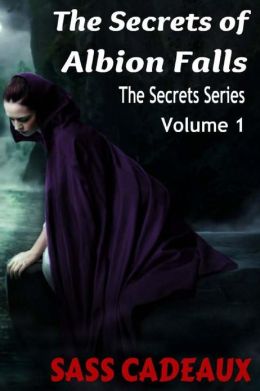 Sophia, a young girl suffers many of the plights an adolescent girl sustains. With an emotionally distant mother, a step-father that rules with an iron fist and step brothers that think she’s invisible half the time, her only saving grace is her brother Raymond. It seems the only way to abandon the strife of a broken home and for a kid to be a kid is in her chosen sanctuary of Albion Falls. Unbeknownst to her parents she’d often tag along with Raymond and his best friend Liam for surrogate comfort, relaxation and one adventure after another. Enter Alba.

On the surface Alba is just another mischievous young girl who befriends Sophia when she needs it most. Something is most extraordinary about Alba. It seems only Sophia is able to see her and is privy to all of the magical enticement that comes along with her. A self-professed Fairy, Alba soon educates her new friend on the ways of supernatural entities and their ways of life.

After Alba becomes mysteriously estranged, something most unexpected and equally bizarre transpires. Roger, her step father is suddenly kind to her, almost human. Aldo, a boy from her high school, jock extraordinaire and youth socialite ‘A’ lister has suddenly become immensely interested, staking her as his chosen mate. Everyone who associates with Aldo is loyal, close knitted and devoted seemingly until the bitter end. Will Sophia’s estranged special friend Alba be the key to unfolding the mysteries of Aldo and company or is there something far more sinister behind the layers in Secrets of Albion Falls.

I’ve always been a sucker for a good metamorphisis tale. While the majority of horror and dark fantasy fans tend to gravitate towards the borderline saturated vampire tale I find myself more compelled with the romance of a shape shifter by moonlight. There’s something about the folklore that resonates into reality. At times we all feel like a wolf in sheep’s clothing or at very least being pressured to appear in another form that is not entirely our own. It’s primal symbolism and manages to lure me every time. Author Sass Cadeaux delivers in Secrets of Albion Falls with a powerful punch. Perhaps most cunning is the fact she’d rendered a great deal of readership high in suspense since last August.

During last year’s ill-fated Fan Expo in Toronto I was honoured to sit in on the independent Canadian author’s panel discussion. It was one of the only redeeming elements of the entire weekend and made the whole endeavor worth-while, then some.

One of the greatest rewards as a contributing writer, aside from the obvious opportunities to engaging in some phenomenal adventures in literature, cinematic experience and convention coverage is being witness to seeing an artist evolve and recognize their true
As part one of the panelists Sass contributed to the round table discussion offering aspiring young authors tips on developing and marketing your creative craft. To entice her readership she’d handed out a fifty page pamphlet on her works in progress Secrets of Albion Falls. I was captivated instantly, insatiable for more. I took the liberty of contacting the author and have since developed an extraordinary friendship. She’d allowed me the opportunity to read her hit series Coalition of The Supernatural and has even offered encouragement and advise with respect to my often chaotic and flimsy attempts at creative writing.

Although the pamphlet contained a mere fifty pages or so it was just the right dose of captivation and enchantment to whet the appetite for explorers of paranormal adventure.

That being said I rather enjoyed The Coalition of The Supernatural as a previous review will indicate in the archives here. I took almost seven months to plunge the recesses of my eager mind deep into the complete version of The Secrets of Albion Falls.

Descriptions within the tale were nothing shy of extraordinary with vivid imagery that denotes an almost lucid back drop of characters, subtext and themes. We’re instantly invested into a bona fide fairy tale, something that is rarely broached upon in today’s contemporary horror fiction.

The character development is spot on exploiting a current society where traditional family units are a ghost of a memory. Protagonists lure you into empathy, inviting a personal piece of you and me into the tale. We plunge further into the layers of how the story transpires with an innate desire to see how the interpersonal relationships develop.

Inner emotion, turmoil and reflection are described effectively from Sophia’s point of view. Cadeaux truly shines in first person persona writing, bringing a myriad of cognitive, feelings and perceptions to life. The author has truly fine-tuned her sense of subtlety in laying clues and innuendo surrounding Aldo and company’s unusual ways. Just when we’re expecting the story to take one direction, it takes a most unexpected detour much to the delight of cynical and novice readers alike. There seems to be an exorbitant duration in plot development when Alba disappears for the climax to come until full flourish. Yet it’s a justifiable evil in this case and will disappoint few and far between. A must read for any fans of fantasy and commercial horror fiction.

For more information on how to order The Secrets of Albion Falls and the collective works of Sass Cadeaux: