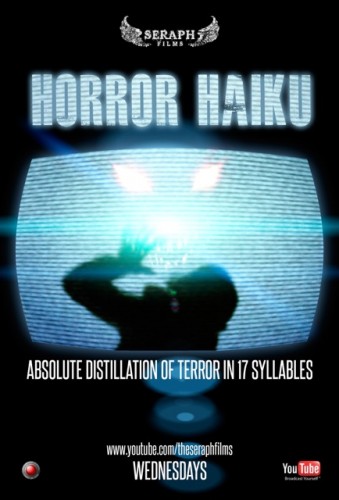 SERAPH FILMS, L.L.C. is pleased to announce the release of the company’s much anticipated series: HORROR HAIKU on the company’s YouTube channel: www.youtube.com/TheSeraphFilms.

The short series is hosted by JOHN C. EPPERSON (Scary Larry) and ANNE LEIGHTON (The Young and The Restless) and features uber-short horror vignettes based on fan-written haikus. The first four haikus were penned by JAMES BORING, a fan of the production company and friend of director, GENE BLALOCK. “We have lots of great projects coming up this year,” says BLALOCK, “but we’re very excited about HORROR HAIKU. It gives us a rare opportunity to interact with our fans and tap into their creativity and love for the genre.” Producer, MEERA BIGGS, adds, “Horror Haiku was a great way for us all to continue to spend time on set and push our boundaries as a company, while in pre-production for our larger web series and the handpicked shorts we slated for 2013.”

HORROR HAIKU’s first episode is about JACK FACE, a serial killer with a sadistic streak and a twisted sense of humor. BLALOCK indicated that JACK FACE may appear in subsequent episodes, but would not confirm. The series airs on Wednesdays on YouTube and is also featured on the group’s website: www.SeraphFilms.net.

In 2012, Seraph has seen several of its films honored as official selections in a variety of festivals. Seraph screened its popular horror film THE HOUSE at the LA Horror Fest, October 27, 2012. Other Seraph films that appeared in festivals include A SECOND CHANCE AT CHRISTMAS (Big Bear Lake International Film Festival), the action/thriller VENDETTA (Jaxon Film Festival in Michigan), and THE FACE AT THE WINDOW (Atlanta Horror Film Festival). The group expects to premiere AMONG THE SHADOWS and TO KRISTEN WITH LOVE in early 2013. MY CHRISTMAS WISH, a feel-good short about the beauty of Christmas, is expected to make its festival premiere in late 2013.

Seraph Films, L.L.C is a group of dedicated filmmakers based in Los Angeles whose credo is quality, audience, content.

For more information on Seraph Films, please visit www.seraphfilms.net or the company’s YouTube channel at youtube.com/theseraphfilms.