ROOM 237 Gets Some Fancy New Artwork

A new one sheet has clawed its way from ROOM 237 the documentary style feature on THE SHINING. Playing off the very popular paperback release of the Stephen King novel this new poster certainly grabs your attention. 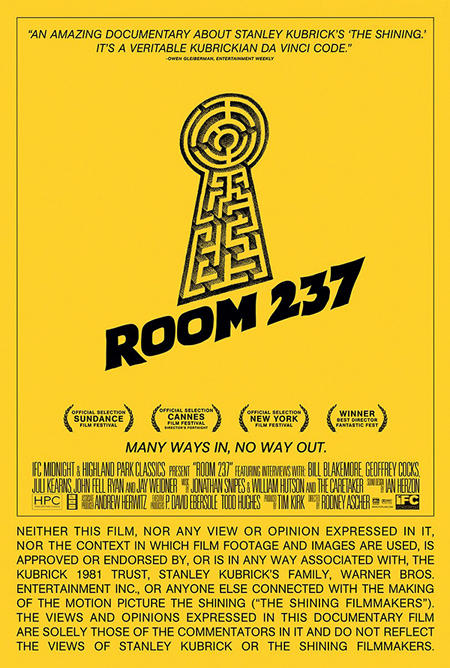 Yeah, see what I mean, sure does stand out!

If you haven’t yet got up to speed on ROOM 237, here all the info from the press release:

IFC Midnight is proud to present Rodney Ascher’s highly acclaimed ROOM 237, which will be released on March 29, 2013, at IFC Center and Elinor Bunim Monroe Film Center in New York City, followed by a national rollout. The film will simultaneously be available on Cable VOD, iTunes, and other digital outlets (Sundance Now, Amazon Streaming, Xbox, and more).

Since its premiere at Sundance, Room 237 had been a festival sensation at Cannes, Toronto, New York, Chicago, AFI, and Fantastic Fest. The film also won the IDA Documentary Award for Best Editing.

After the box office failure of Barry Lyndon, Stanley Kubrick decided to embark on a project that might have more commercial appeal. The Shining, Stephen King’s biggest critical and commercial success yet, seemed like a perfect vehicle. After an arduous production, Kubrick’s film received a wide release in the summer of 1980; the reviews were mixed, but the box office, after a slow start, eventually picked up. End of story? Hardly. In the 30 years since the film’s release, a considerable cult of Shining devotees has emerged, fans who claim to have decoded the film’s secret messages addressing everything from the genocide of Native Americans to a range of government conspiracies. Rodney Ascher’s wry and provocative Room 237 fuses fact and fiction through interviews with cultists and scholars, creating a kaleidoscopic deconstruction of Kubrick’s still controversial classic.