I’ve already shown you the poster, a couple of still shots, all this is left if some moving images and tonight, I’ve got that covered for you. Our first look comes tonight and it comes in the form of a trailer.

First up though, let me remind you of what this one is all about:

“The film captures the controversy between Henry and his estranged son, Nathan. Reunited at a friend’s small wedding party, in a remote cabin, Henry and Nathan have their usual awkward interactions. Nathan, accompanied by his girlfriend Cecilia, seeks his father’s approval. Cecilia’s presence only adds to Henry’s discomfort, forcing him to want to leave, but a storm hits, trapping them in the cabin and headed for the worst along with the rest of the group. None of them really realize what is truly in store.”

The film was directed by and stars Michael and also along for the ride are Sarah Butler, Caitlin Keats, Matthew Ziff, Chris Meyer, Richard Gunn and Jennifer Blanc-Biehn. 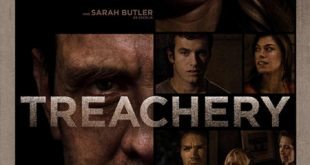 An Update And New Poster For Michael Biehn’s TREACHERY