More tattooed mystery torture per way of creator Remy Couture. This piece is a sister piece to the first simply titled Inner Depravity

When the first image you see happens to be a dismembered crotch, you can be certain that what follows next is not going to be pretty. Though any astute viewer would call this gore prop for exactly what it is…a prop.

Following in the footsteps of his first film “Inner Depravity“, Remy Couture has delivered yet another atrocity for curious minds who don’t mind experiencing another 9 minutes of filthy gore-visual assaults. Crime photos seem to be a reoccurring theme in these depraved short films as a series of nasty stills hangs on a nearby wall.

A young woman is seen tied to a post as our returning masked killer picks up a hack saw in the interest of slowly cutting thru her handcuffed bound wrists. Keeping in the tradition of unrelenting gore, he proceeds to feed it to a nearby child before going for the throat on his  unfortunate victim.

The short seems to exist “purely” to show off some realistic looking fx interlaced with some interjected insanity. The gross stuff arrives with a corpse being cut open to reveal a chest full of maggots, only to be fed upon like a starved vampire.

In the case of “Inner Depravity 2“, it doesn’t take alot to make its point with some dark visceral footage to pass the time. The film is exactly as described like something extracted from a much longer and larger project.

In retrospect, even though the acts are nasty and low budget, you could probably point to TV today to see a bit of the same with shows like “The Walking Dead” delivering the same gut-pulling “feasting-on” in a more commercial setting. “Inner Depravity 2” is part of a 2 release offering that made the news for Remy Couture and got him into hot water with local authorities who disapproved of his realistic footage. In review, this footage doesn’t offer much in premise of reason which makes it all the more nasty. Perhaps the filth of yesterday is becoming the meat of today’s films (and TV shows, for that matter).

“Inner Depravity 2” appears nastier for the sole reason of being left to an isolated incident without a story wraparound to buffer it. 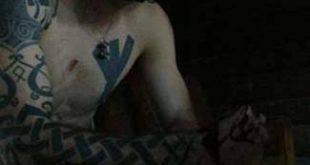