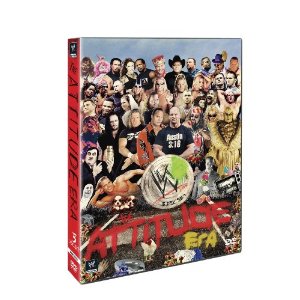 This collection of matches, highlights arguably the most popular time period in wrestling history. If you had your eyes open in the mid to late 1990’s then you probably heard about or witnessed this pop culture phenomenon. After the big wrestling boom in the 1980’s, things became stagnant and wrestling had a down period. It was obvious that our society was changing and the cartoon style of booking that worked before was transparent to the new breed of wrestling fan. Hulk Hogan thwarting off bigger than life bad guys just didn’t work anymore.

The World Wrestling Federation’s flagship television show, Monday Night Raw was getting pummeled in a ratings war against rival wrestling company, World Championship Wrestling and it’s show Monday Nitro. The owner of the WWF, Vince McMahon was going to lose the war if he didn’t get some ATTITUDE and get it fast. This DVD chronicles the years of 1997 to 2001 and those superstars who became synonymous with The Attitude Era.

This three disc set features a documentary and a collection of individual matches, interviews, and segments that made The Attitude Era what is was. It’s not the best work that I’ve seen coming from the WWE archives but it does put things in perspective from that time period. You have stars like The Road Dog from the New Age Outlaws and Mick Foley talking throughout the documentary and explaining the mindset of the company at the time.

I think at the core of the Attitude Era was the feud that everyone could relate to, an employee versus their ruthless boss. WWE hit a gold mine by turning, WWE head honcho, Vince McMahon heel and squaring him off against, the everyman, Stone Cold Steve Austin. While the documentary portion had a lot of old clips, I really think it would have benefited by having Vince McMahon tape an interview talking about some insider information about what went on back then.

They covered a lot of ground in a short period of time. I seemed a little rushed. I would have liked to see the documentary either a little longer or if it stayed at the same length then maybe a little more finely tuned. In addition to the Steve Austin – Vince McMahon storyline, they also featured The Undertaker – Kane rivalry, the creative of Degeneration X headed by Shawn Michaels and Triple H, the daredevil stunts of Mick Foley to the high risk ladder matches between The Hardy Boys and Edge & Christian.

One of the electrifying wrestlers ever, Dwayne “The Rock” Johnson, is also featured on the The Attitude Era DVD, but I think his segment was lost in the jumble. Again, I understand that there is a lot to cover but I think the contributions of The Rock during this time period but substantial and probably should have been highlighted more or maybe in a different way.

The Attitude Era is known for pushing the envelope and we get a good taste of some of the bad taste that drew in the audiences. They pushed characters such a Val Venus, the adult film star and The Godfather, the pimp who was escorted the ring by his Ho Train. There were tons of half naked Diva’s strutting their stuff and re-investing the male audience in female wrestling. Sunny lead the path, followed by Sable and Kat, Trish Status and Lita. We also saw the inception of WWE’s Hardcore Division as it was trying to catch some of the luster of a wrestling style made popular by Extreme Championship Wrestling.

I would have liked to see a punch more attitude in compiling this footage. The Attitude Era was a good time to be a wrestling fan and although there were a few flaws, it’s still a good trip down memory lane. I think the current direction of professional wrestling isn’t working and maybe an injection of attitude, just might make people turned on the product again.

If I can take a moment and examine some of the similarities between horror and wrestling, I think I can make some of the same arguments against Hollywood’s current attitude towards the horror genre, or its’ lack of. I do believe ATTITUDE is definitely what’s lacking in the creative direction of where horror is headed. Let’s give a defining “middle finger” just like Stone Cold would, at those corporate A-holes who think they know how to make good horror films. It think it’s about time that WE, the HORROR community, have our own ATTITUDE ERA! Watch out.