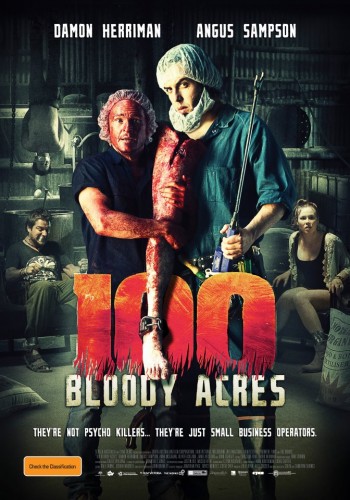 James is heading to a music festival in the bush with girlfriend Sophie and best mate Wes. He plans to propose to her this weekend, unaware (for the moment) that she and Wes have been screwing on the sly. When their car breaks down, friendly local and co-owner of a struggling blood and bone fertilizer business, Reg Morgan stops to offer a lift. But Reg is eyeing off a business opportunity here: he and his partner, big brother Lindsay, have recently discovered a rich new ingredient to their organic blend – human corpses! James, Sophie and Wes are about to discover that relationships can be bloody hard work, especially when someone’s trying to turn you into liquid fertiliser.

The marriage of horror and comedy has always divided the masses. From the first moments Abbott and Costello schmoozed with the supernatural, the motion picture industry has taught us that the horrifying can be hilarious as well. Some will never accept this unholy union of genres, but I’ve always found the two can be a perfect fit when properly executed. The sublime “Tucker and Dale Vs. Evil” is a recent stand-out example of such a cinematic c**ktail, and one of the very best films of its year. Unfortunately, they can’t all be winners, as any “Scary Movie” sequel after the Wayan’s Brothers jumped ship on the series attests to. 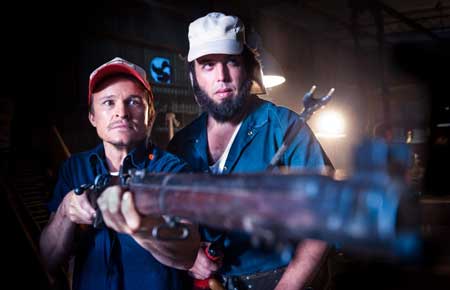 Boasting its own distinct style yet bearing more than a slight resemblance to “Tucker and Dale” in tone is quirky Aussie import “100 Bloody Acres,” an uneven but enjoyable gore romp about a pair of oddball brothers who discover the perfect secret ingredient to boost their fertilizer business profits. The Morgans, consisting of timid Reg (Damon Herriman, best known as Dewey Crowe on the TV series “Justified”) and hulking, surly Lindsay (Angus Sampson, who will appear in the long-awaited “Mad Max: Fury Road” in 2014) live a quiet life on their isolated farm, tending to their award-winning pumpkins and collecting corpses from auto accidents that occur on a sketchy and uninhabited stretch of road near their home. It appears human bodies is what makes their Morgan Brothers Blood and Bone Fertilizer the toast of their rural community.

Transporting the latest crash victim back to the farm, Reg comes across the radiant Sophie (Anna McGahan), her boyfriend James and party animal best bud Wesley, both portrayed with frat boy gusto by Oliver Ackland and Jamie Kristian, respectively. Experiencing engine problems en route to a music festival, the three talk the reluctant Reg into giving them a ride. Sophie and Wesley have been fooling around behind her man’s back, a fact she confides to Reg oh-so-quickly as she rides shotgun in the cab whilst the boys struggle with the manure (and hidden corpse) stench in the trailer.

Once James and Wesley realize they’re not alone amongst the bags of fertilizer, Reg is forced to take the group back to the farm, where he and Lindsay tie the three up. Here is where “Acres” finally finds its goofy groove, as Lindsay decides to turn the youngsters into mulch via an industrial meat grinder. As Reg desperately tries to talk his abusive sibling out of murder, Wesley escapes via a knife secretly passed between the three captives in a deftly funny scene, one of many the second half has to offer as the action progresses.

With Lindsay in close pursuit and the copious amounts of LSD he’s ingested kicking in, Wesley finds himself in Fairy Land, a defunct and bizarre tourist attraction in the middle of the forest. (Don’t ask. By this point in the game, you’ll be having too much fun to bother.) His romp through this creepy netherworld, complete with the molestation of an animatronic Snow White that ends in a tearful apology, is absurdity at its finest, and one of the funnier moments I’ve witnessed in a spell. Meanwhile, back in the barn, James insists on discussing their relationship woes after Reg spills the beans about Sophie and Wesley, though he hangs precariously over the grinder upside down from chains. Outstandingly performed by McGahan and Ackland, these scenes rival the Fairy Land acid trip in the belly laughs department. To discuss any further the unexpected and delightful turns “Acres” takes from there is a disservice to the film, so I’ll end any semblance of a synopsis. However, I will hint at a deadpan hilarious conversation about obtaining a missing appendage between Reg and Wesley from inside a locked trunk (“boot” to the Aussies, which I think is a cooler word), and the arrival of a third Morgan who dials up the weirdness approximately six notches into disturbing territory. It’s fun stuff, this flick.

Accompanying the spot-on supporting players are veteran character actors Herriman and Sampson, both giving beautifully nuanced performances in their largest roles to date. Reg, who yearns for his overbearing brother’s acceptance yet eager to do the right thing and innocently crushing on Sophie, is a wimp turned belated hero you find yourself cheering for in the final confrontation. On the other end of the spectrum, Sampson is a marvel of homicidal menace, bringing layers of bemused indifference to Lindsay that damn near endears him to us. Not an easy feat for the clear villain of the piece, to be certain. His encounter with the local constable (John Jarratt, who I believe has been in every single Australian production since “Wolf Creek”) while Wesley thumps around in his car is a highlight of the whole enterprise. It’s an incredible interpretation, and one that I hope gains Sampson the recognition he deserves overseas, if not here in the states.

Cameron and Colin Cairnes, who both scripted and directed, make a strong and impressive debut with their first feature-length outing here, and I look forward to what they have to offer us in the future. Though their script struggles awkwardly to find its footing in the first half hour and also falls a tad flat in its last sequence, I will not deny that these dudes can bring the funny. Despite healthy doses of viscera sporadically injected into the proceedings, there is nothing remotely frightening in “Acres” for the horror geeks to revel in. This is purely a sit-back-and-laugh-your-ass-off affair, and on that level it delivers in spades.

If you have yet to check out “Tucker and Dale Vs. Evil” (And if you haven’t, what the hell is wrong with you?), this would make a perfect back-to-back companion piece for an evening in. “100 Bloody Acres” is a wonky little splatter comedy with a wickedly clever sense of humor and loads of heart to spare. At the risk of repeating myself, it’s fun stuff, this flick. Indeed. 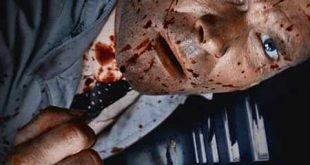