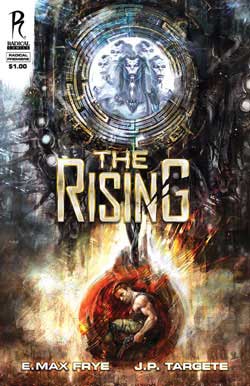 The Rising premier issue. This new series is kept short and sweet at least on it’s debut issue. Right off the bat, readers will be blown away by the top notch artistry in this one.

The issue is light on text so much will have to be understood thru visuals. It appears that the military are at war wit the DRACS but back at home, there is a peace treaty being negotiated. Of course not everyone is on board with this decision and these DRACS seems to possess some pretty lethal weaponry matched with a cold demeanor.

Back on the planet a cold emotionless reverend is intent on teaching others that GoD is absent from this world.  The DRACS existence has sort of catapulted that notion into reality and while there are some that still hang on to the notion, the Reverend is intent on showing them that there is only flesh and progress, nothing more.

At the issues end we see a new warrior “Darwin” unleashed upon firm believers that don’t get it.

This issue comes from the team at Radical comics featuring the talents of E/ Max Frye and J.P. Targete. The issue is a prelude into the new 3 part series from the team that looks to be promising and violent. Its a good thing Radical is around to keep those elements moving forward! 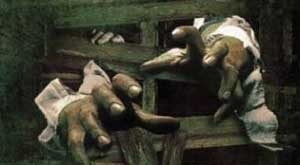