Home | ‘Convention of the Dead’ Horror Comedy Wraps in UK

‘Convention of the Dead’ Horror Comedy Wraps in UK

The sets fell silent for the last time on the shooting of UK independent comedy horror film Convention of the Dead recently, which has been filmed throughout the month of October on location in the UK.

The film, which is now in post-production, is the first full-length feature written, produced and directed by Kelvin Beer and tells the story of a group of geeky friends who find themselves thrown headfirst in the deep-end when they attend the biggest Sci-Fi Convention around… Fanatically looking forward to the event for weeks, little do they know they are walking into a real life zombie apocalypse! 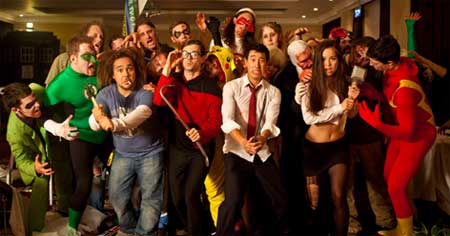 The film stars fresh new UK talent, some of whom have previously featured in films such as Axed and the Harry Potter franchise, but the real stars of the show are the favorite cult film and comic book icons as you have never seen them before!

The film was shot on location at the Menzies Carlton hotel in Bournemouth, Dorset and was produced by Paper Street Pictures and London based production company Three Edged Productions. With cast and crew numbers reaching the 200 mark the film took extreme dedication and expert production to complete on schedule, with shooting carrying on into and through the night on several occasions.

The films Director, Writer and Producer, Kelvin Beer, said “Shooting my first feature in my home-town of Bournemouth has always been an ambition of mine. We have some great footage and I know the final edit will be something we can all be very proud of… Filming an independent film is not an easy task and without the support of my producers, crew, acting cast and extras I would have no film and so it is to them that I offer my eternal thanks”.

The cast and crew were made up mainly of industry professionals but on days where large numbers of crew were needed to be zombies, students, film fans and members of the public were invited onto set to be given a full zombie make-over and play a vital role in a film.

Convention of the Dead also seems set to become an instant cult classic, with thousands of people from all over the world showing support for the independent feature film on social media websites. The films facebook page currently stands at 5,622 likes

As soon as post-production is completed Convention of the Dead will receive a public screening for cast, press and industry professionals before being entered for consideration on the International Film Festival award circuit.

Tags Convention of the Dead