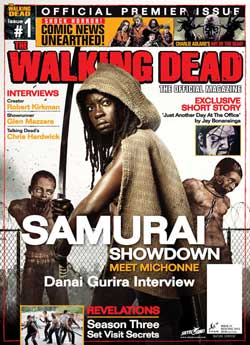 This 100-page issue features an inside look at the TV show, comics and everything in-between: The Walking Dead creator/writer Robert Kirkman reveals what’s coming up next on the TV show, which broke basic cable records again with the season three premiere, and how the shocking events of issue #100 of The Walking Dead Comic will affect Rick and our favorite survivors; an exclusive interview with Danai Gurira, who plays the iconic character “Michonne”; an exclusive prologue to the new Walking Dead book, The Road to Woodbury, about the rise of Philip Blake aka The Governor written by Jay Bonansinga and Robert Kirkman; behind-the-scenes set visit report; executive producer/showrunner Glen Mazzara tells us why he’s so excited about season three; plus, all the latest news, revelations and tips for fans of the entire The Walking Dead universe.

Discussing what fans can expect from the magazine, Robert Kirkman, creator/writer of The Walking Dead, says, “We’ll be talking about what’s coming up on the TV show, we’ll fill you in on what to expect from the comic and you’ll hear from all the talented people who work on all the various Walking Dead projects. This magazine is going to rock!”

The magazine will also be available to read on the iPad, Nook and Kindle Fire starting tomorrow, giving Walking Dead fans an exciting alternative to the print edition and a high quality digital reading experience. Just search ‘The Walking Dead Magazine’ on your device’s newsstand or app store.

The magazine is currently offering fans an exclusive FREE The Walking Dead T-Shirt (not available in stores) with new print subscriptions. For more information on this subscription offer and other offers in your territory, visit the magazine website,www.TitanMagazines.com/WalkingDead. Readers can also join the magazine on Twitter at www.Twitter.com/WalkingDeadMag and Facebook at www.Facebook.com/WalkingDeadMagazine to keep up to date with news and special offers and www.Skybound.com, the source for all news on The Walking Dead, Robert Kirkman and all Skybound titles.

The Walking Dead, The Official Magazine issue #1 will be available on newsstands and comic book stores in the U.S. on October 23, in the U.K. on November 8 and Australia & New Zealand on December 18. Digital editions will be available globally on the iPad, Nook and Kindle Fire from October 23.

Robert Kirkman’s success and passionate advocacy for creator-owned comics led him to become the first person invited to become a partner at Image Comics since the company’s inception twenty years ago. Kirkman is the creator/writer of the Eisner Award-winning The Walking Dead, long-running Invincible, all-agesSuper Dinosaur, The Astounding Wolf-Man and Thief of Thieves. In 2010, Kirkman formed his own Image imprint, Skybound, which publishes his own work and Witch Doctor, Guarding the Globe andClone. Kirkman has earned the respect of the comic, writing and television communities and topped the New York Times bestseller list for graphic novels in 2011 and in April 2012, he took the top five spots on both the hardcover and paperback lists. He’s the creator/executive producer and writer of the hit Emmy®-winning television show, AMC’s The Walking Dead, the highest-rated basic cable drama of all time in the U.S, also an international success in 122 countries and 37 languages. AMC is developing Thief of Thieves as a potential series with Kirkman serving as creator/executive producer and writer. Your destination for all news and merchandise from Robert Kirkman, The Walking Deadand all Skybound titles is www.Skybound.com.

About The Walking Dead, The Official Magazine

Each 100-page edition also includes the latest revelations from The Walking Dead comic team, including interviews with the creators and features showcasing the creative process behind the art. Plus,The Walking Dead creator and writer/executive producer for the show, Robert Kirkman, reveals the latest news from the set and answers fans’ questions.

Issue #1 will be available on newsstands and in specialty comic book stores in the U.S. from October 23, U.K. from November 8 and Australia & New Zealand from December 18.

For more information on The Walking Dead, The Official Magazine visit: