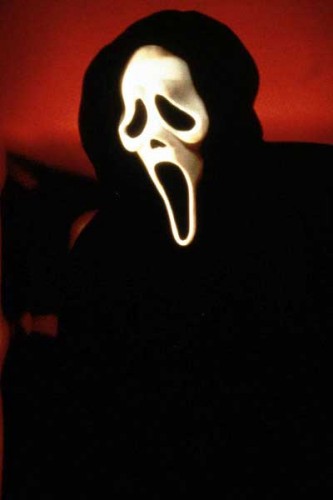 There seem to be some problems emerging with SCREAM 4/SCRE4M which are setting alarm bells  ringing with fans around the world. With creator Kevin Williamson either on or off the project  (depending what you read) and rewrites of the script having taken place, it’s easy to lose track  of what’s actually happening. The film is now shooting., and there seems to be some drama  unfolding surrounding the production- that much is certain. This is actually pretty good press  for the film though, as there has not been a great deal of positive interest in the project thus  far.

A few images of the cast are surfacing online, and a picture of Ghostface was Tweeted by Wes  Craven from the set, but nothing is getting folks that excited yet. This fourth film in the  slasher franchise was supposed to be ushering in a second trilogy of Scream movies, but is there  really that much demand? Surely the most sensible and cost-efficient method would be to just  make this one and see if it bombs before spending anything on putting more of them together.

Maybe that’s what has happened, but I can’t help but think that the Scream movies are no longer  the powerhouse they once were. Even during their original run, they suffered diminishing  returns, and by the time Scream 3 came around, the audience knew what to look for and what to  expect when watching them. The Scream movies were so very self referencial that they quickly  became a parody of themselves with the third film, and now there is a whole new generation of  horror films that have overtaken the old guard.

Here in an age where we’ve got seven SAW movies and remakes of everything under the sun, is  there really any room left for Ghostface and the gang? I’d like to think so, as I have good  memories of seeing those flicks the first time around, but as a box office draw, is there really  enough call for this?

Now, with the news that the production is facing difficulties and the script appears to be  mutating while they’re in the middle of shooting, I hope that we are still going to get a  halfway decent Scream sequel. Do fans want some more masked shocks? Probably, but how much they  want is another matter. The audience has changed. Culture has changed. The world has changed.

Thus, this new Scream needs to have something of a different approach while keeping hold of the  elements that made the films so popular in the first place. It has some strong star power,  including Hayden Panettiere and Emma Roberts alongside returning cast members Neve Campbell,  Courtney Cox and David Arquette. There’s even been a rumour that Matthew Lillard is back in this  flick, which the man himself has denied. Whoever is in it, and whatever shape the script is in  by the time it wraps, I’m praying that we’ll get a flick that does the original proud.

Don’t think for a second that I want this film to fail. I’m a Scream fan- I’m just concerned  that this new one turns out well and reminds audiences just how much fun it can be to be scared.

Ah hell, at least it’s not a reboot, eh?