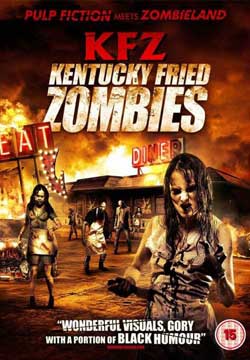 Serial killer Ken (Joshua Grote) has stopped by a diner in the middle of nowhere and takes to his trade of murder. He looks to continue his mayhem on any would-be diner customers but is interrupted by the corpses he has just put in the walk-in freezer.

Best line:
When Ken the killer is being devoured by zombies:
“Aw c’mon! I made most of you guys!” 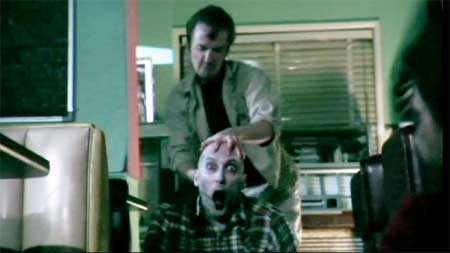 Right off the bat, the main problem with this film is its title. Kentucky Fried Zombies is just an awful name for a movie. The only one worse was the alternate title: “Die-ner. Get it?” I thought of these five alternative titles in about 15 minutes: 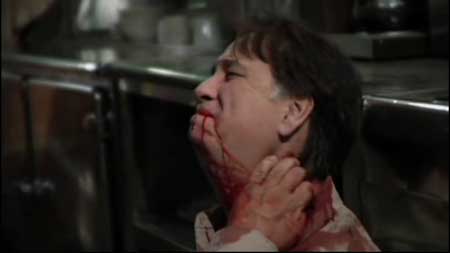 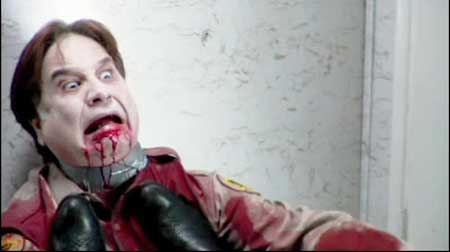 Other than the title, I didn’t have any problems with the movie. It began with a suitably creepy scene where a lonely waitress is divulging her secrets to a customer. The customer seems friendly enough, but the dialogue between them reveals that there is something more to him than meets the eye. Then he kills her. From there, the situation at the diner goes from bad to worse for the anti-hero serial killer, Ken. The comedic element is at the forefront, as Ken seems to not be affected by the goings-on in the diner; he faces everything with a very calm, matter-of-fact attitude that makes him likable. Not to mention, Joshua Grote, the guy that plays Ken, looks like he could be Edward Norton’s brother in the same way that some of the lesser Baldwin brothers look like Alec Baldwin.

I enjoyed the character development. It was just enough to make you interested in the characters without giving too much information. For instance, when Ken the Killer gets knocked out – twice – the flashback sequences are ethereal but not cheesy, and give insight to Ken’s background. Duke the Sheriff has a delusional moment before he dies when he is reflecting on the happiest time of his life (when he was young and married to his astonishingly beautiful wife)and how he remembers recognizing it as such; that realization depresses him so much he remembers wanting to kill himself. The married couple who arrive are having relationship struggles. Rose, who is from South Africa, landed her job at the diner for a man who left her high and dry; she’s been stuck there ever since. These tidbits of information gave me just the right amount of insight and made the characters more believable. 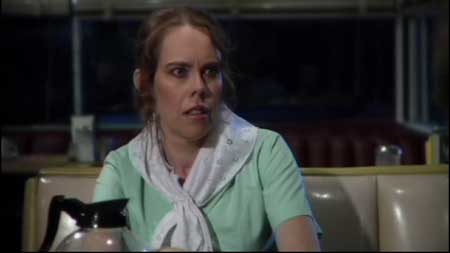 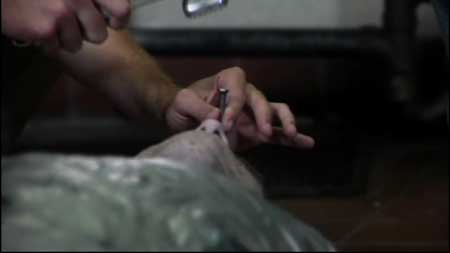 There were other things too. I don’t know if Mr. Horvath, the writer and director, meant it but there’s a recurring spoon theme: Rose, the waitress fiddling with a spoon; husband asking “Do I get a spoon?”; Duke the Sheriff, “Now how ‘bout my spoon…” That was all I caught but it made me wonder if there was an agenda there. Then again I recently re-watched The Matrix, so that could be creeping in.

My favorite bit was when they duct taped the zombie cook, Fred, to the floor. Watching him writhe on the floor – inasmuch as it is possible to writhe within the span of an inch or so – was hilarious.

There were a couple of inconsistencies – zombie waitress was in the freezer, but now she’s operating the register; there are at least two cars in the parking lot, yet Kathy the wife frees Ken because she can’t drive the big rig – but all-in-all Kentucky Fried Zombies is an entertaining film…don’t let the title turn you away.