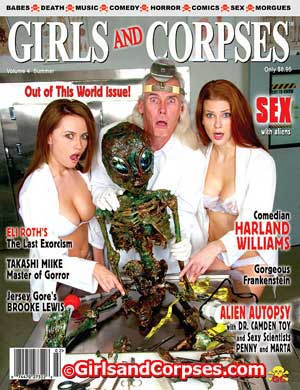 Girls & Corpses you say?  How about Girls and Alien corpses? Well one look at this months cover will answer that question… which is of course, geeh, when is someone gonna come out with a magazine that shows of hot ladies, horror and yep, alien corpses…look no further my friends.

Or maybe you’ve been asking yourself, where can I buy a magazine that doesn’t repeat the same content that everyone else is?- right again! G&C stands out instantly not for its obvious reason but because it also happens to be a well printed magazine, rich in color and created on a sturdy glossy stock. For those who don’t know much about paper, this means when your “other” magazines are drying up and deteriorating, G&C will still hold its own.

This is important because there is just too much fine ASS in these issues not to keep around for a lifetime. moving on let’s get into the issue. A major feature here is the twisted MAD style humor meets Dawn of the Dead cartoons that are both horrific and hilarious. One that caught my attention was the “Last Laugh” gag, that pokes fun of Famous Monsters. Not that I will share opinion in an obvious….um… conflict, but it was pretty funny and humor is still what makes the world go round.

Eli Roth is interviewed about his newly “produced” film “the Last Exorcism. Eli states a few opinions about exorcism, the film and even the obvious connection to the film “the Exorcist”, but none-the-less…his commentaries have mad me a believe that this film is one to see. I’ve always been more attracted to films that are actually scary, and I think that this one may be a new contender for that spot.

“Jersey Gore” feature a smack down, well endowed photographed spread featuring 2 hotties, Brooke Lewis and “Heather Tocquigny” stepping all over some green dudes. I think my viewing area on this one is more confined on the fleshy areas of the shoot. “Brooke” is one of our HN Vamps and great to see making her rounds in the print world. I did laugh a bit that every shot of here has her head turned to one side……more full frontal Brooke!

Moving on to more Hotties, lordy be, G&C granted us a centerfold this issue. “Penny Drake and “Marta Zolynska” are featured with Dr. Camden Toy in a play on Alien autopsy. I think now seeing this version my vote sin for the lingerie version – smack a doodle-doo! Don’t stop there as “Alina Murder” & Dargon Saint Murder” give us some great by the beach shots and if that isn’t enough we even get a pretty hot section of amateur corpses of the month. Note to self………contact more Vamps for HN!

Necromagickal is on board bringing his intellectual weirdness with a ditty about alien necrophilia. According to the master, alien erotica is all the rage these days. Well its good to know someone is there to be probed. Just as long as its not me, jump into that ET party coral. It’s also good to know that G&C has someone on board to keep us all educated on that stuff cuz…I’ve been hurting for some lowdown.

Takashi Miike shares a moment with an exclusive interview with the master of all of Asia. Miike sure is passionate above his filmmaking …. lucky for us, as well. Now when can we expect the next “Imprint”???

“Mindrape” features some rather eye catching and highly disturbed art from former inmate Mark Cooper, who tells us about his stay in prison, what to avoid and how he channeled all that dark energy into his art pieces. Perfect for death metal or dark indulgences. On the flip side we have art from Nicolas Rabier who paints with real blood! Now the is novel and something different but I really though the art pieces were amateurish and didn’t deserve 2 full color pages in the mag….sorry, but i call em like I see em.

“Mounting Melissa” explores a girls true passion with taxidermy. Kind of cool, kinda creepy….though I would mind a few heads hanging from my living room as well. More stuff comes in the way of a Harlan Williams interview, An article on “Beauty and the Deceased” and some real cool photos of gravestones from Jeane Trend-Hill. Geesh and our graveyard is mostly nameplates and generic tombstones….. I guess I need to get out more.
Sexy Freaks!!! EWWW…… not for me, sorry, though I am digging some of them corpses of the month entries…..yowww