The Godfather of Gore Speaks! 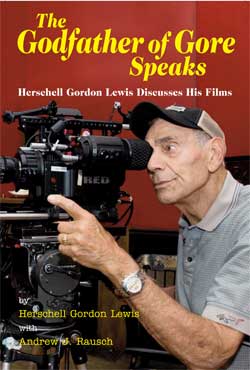 Exploitation filmmaker Herschell Gordon Lewis is credited with single-handedly creating the gore genre with the 1963 release Blood Feast. This low-budget shocker would ultimately influence nearly every horror movie which has followed, as well as “high-brow” films as varied The Wild Bunch and Reservoir Dogs. Lewis, dubbed “The Godfather of Gore,” crafted more than thirty-five films in his ongoing career.

In The Godfather of Gore Speaks: Herschell Gordon Lewis Discusses His Films, the filmmaker explains his choices and motivations—from concept to finished product—in much more detail than ever before. Assisted by noted film historian Andrew J. Rausch, Lewis shares often hilarious anecdotes and provides analysis for the thirty-nine films which he either directed or assisted with direction.

To learn about this or other BearManor Media titles, visit www.bearmanormedia.com

Tags The Godfather of Gore Speaks