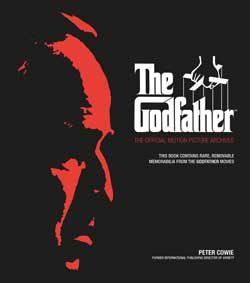 This book contains rare, removable memorabilia from the Godfather movies
By Peter Cowie

The Godfather: The Official Motion Picture Archives Is the Definitive Guide to One of Modern Film’s Greatest Works

One of the most iconic franchises in the history of cinema, The Godfather celebrates the fortieth anniversary of its theater debut. The American Film Institute ranked this masterpiece Number 2 in its poll “100 Greatest Movies of All Time.” The captivating saga of an Italian-American family and its immersion in mafia traditions was a galvanizing moment for thirty-one-year-old director Francis Ford Coppola. It was also career defining for actors Al Pacino and Marlon Brando. Now go behind the scenes with The Godfather: The Official Motion Picture Archives and experience what it was like to make one of the greatest movies of all time.

The Godfather trilogy has amassed 52 Oscar nominations, 29 Oscar wins, and netted $484,000,000.00 in worldwide box office sales. This stunning book of memorabilia and never-before-published photos takes you behind the scenes to reveal the seldom-told story of how this epic was created against great odds. Despite the critical acclaim and financial success of the venture, the initial Paramount production was made under pressure-cooker conditions. Coppola was Paramount’s third choice for director; no one wanted to gamble on an unknown actor named Al Pacino; and the studio initially wanted Robert Redford or Ryan O’Neal to play Don Corleone. This unexpected box office smash is brought to life through previously unpublished photos of experiences on the set and on-location filming that captures the grit of 1970s New York. Fans will also savor the book’s rare stills from deleted scenes.

With each passing decade, the stature of The Godfather grows, not just among film buffs but also among new and revisiting audiences throughout the world who are discovering the film on television and DVD. This treasure of American cinema has been imitated and satirized, but never equalled. To celebrate forty years of The Godfather, Paramount studios has granted replications of fifteen items of archival memorabilia, including a poster publicizing the original film, a special leaflet on the prosthetic teeth worn by Marlon Brando, and a page from Mario Puzo’s novel annotated during the writing of the screenplay. The Godfather: The Official Motion Picture Archives is the definitive behind-the-scenes guide to the making of one of modern film’s greatest works.

Peter Cowie is a film historian who has written extensively on the work of Francis Ford Coppola, and in particular The Godfather trilogy. He is the author of some thirty books (including biographies of Ingmar Bergman, Orson Welles, Louise Brooks, and Francis Coppola) and was formerly international publishing director of the show-biz bible Variety.