Home | All Hallows Evil: Lord of the Harvest – Cult Throwback Coming Your Way!

All Hallows Evil: Lord of the Harvest – Cult Throwback Coming Your Way! 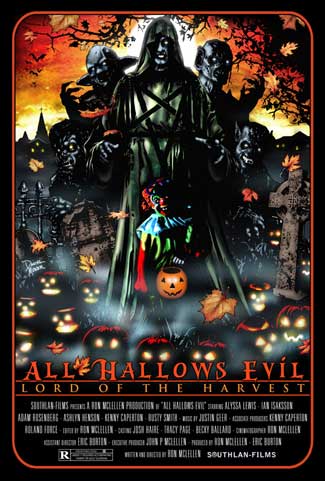 The sleepy town of Hallowed Hill is known by many as the Halloween capitol of the world because of its history, and because of its Pagan origins. People from all around come to visit the town on the night of All Hallows Eve.

200 years ago, on Halloween, a great evil was unleashed on the town by a witch who dabbled in the black arts. After a long night of mayhem, brought on by this terrible evil, a select group of towns folk were able to stop the witch, and dispatch the evil back into the darkness from whence it came.

Now 200 years later a young girl finds an ancient Pagan book archived deep in the old cellar of the local library, and with the help of her wicked foster mother the two again release the evil Sam Hain from his hell-bound prison to once again wreak havoc on Halloween night. The question is, can the town once again join together to stop the evil, or will Hallowed Hill be completely devoured by the Lord of the Harvest.

All Hallows Evil is written and directed by Ron McLellen (‘JackO’Lantern’) of Southlan-Films. The film is produced by Ron McLellen and Eric Burton, and stars Alyssa Lewis, Ian Isaksson, Rusty Smith, Adam Rosenberg (‘Teen Wolf’), Sonya Thompson (‘The Walking Dead’), Ashlyn Henson, Kenny Caperton and Joshua Haire. The majority of the movie was filmed in the beautiful small town of Rome, Georgia, but several scenes were shot at Kenny Caperton’s infamous Myers House NC, which is a life-size replica of the Michael Myers house from John Carpenter’s HALLOWEEN. All Hallows Evil is scheduled to be released in October 2012, but is still working out distribution. For more information, check out the film’s official IMDb page and visit the film’s official Facebook page.