In Chile, a group of travelers who are in an underground nightclub when a massive earthquake hits quickly learn that reaching the surface is just the beginning of their nightmare.

The gorgeous scenery of Chile is the backdrop for “AFTERSHOCK”, the new film from producer Eli Roth and director Nicolás López in which a vacation full of wine, women and song turns into a life and death struggle for six people when an earthquake turns the country into a blood soaked battleground. In addition to his producing duties Roth also appears in the film as Gringo, who is vacationing with his friends Pollo (Nicolás Martinez) & Ariel (Ariel Levy). Although it’s never said outright, it seems that Pollo works in the music industry and can get Gringo and Ariel into the swankiest clubs and parties where the trio spend their time trying (& failing) to make time with various Chilean beauties. They eventually hook up with three gorgeous ladies Monica (Andrea Osvárt), Kylie (Lorenza Izzo) & Irina (Natasha Yarovenko) and the six of them make plans to travel to the coastal town of Valparaiso where there’s a very exclusive party waiting for them. But before the big party, the six of them enjoy themselves by eating, drinking & taking in the sights in the soon to devastated town.

The first 35 minutes of the film is spent getting to know the six main characters and seeing some of the amazing beauty that Chile has to offer. I, for one have never been to Chile and I must admit that director López’ camera took every possible advantage it could in convincing me that I might want to change that in the near future. The sights and sounds on display are wonderfully bright & crisp with the local flora and fauna taking center stage as our foolhardy bunch get to know a bit about themselves and each other.

It was a good idea to use the first third of the film to help the audience get to know all of the main players a bit because the usual doesn’t apply here and everyone in the cast has the proverbial Sword Of Damocles over their head. The script (By Roth, López & Guillermo Amoedo) takes pains to establish a bit of backstory for all of the players and that helped make their fate important to the audience and that’s never a bad thing. The script uses some true stories of the 8.8 magnitude earthquake that hit Chile in 2010 and many of the actual locations (Some still in disarray) were used during the production as well. So as far fetched as some of this may seem to some of you, keep in mind that some of this stuff actually happened. This makes “AFTERSHOCK” even more disturbing to watch at times.

The next third of the film takes us right into the earthquake and the devastation & hysteria that followed. If the first section of the film was a sort of travelogue then this section would be the “Disaster” part of the film. There are scenes that reminded me of classic disaster films like “EARTHQUAKE” (Of course) & “THE POSEIDON ADVENTURE” but I was also reminded of the old “EARTHQUAKE” (Since retitled “DISASTER”) ride at Disneyland as well. But none of the aforementioned titles are even in the same cinematic universe as “AFTERSHOCK” is in terms of violence. Yeah, people die in your average disaster film but people REALLY DIE in “AFTERSHOCK”. It turns into a bloody bacchanal with various members of the cast falling victim to falling concrete in some truly gruesome ways. It was quite obvious to me which part of the script Roth had some fun with and while we don’t lose any of the six principals during the initial chaos, one of them gets hurt attempting to lend a hand to a damsel in distress. That doesn’t bode well for him in the last third of the movie. Did I forget to mention the Tsunami warning that adds to the madness? Well…there’s that to worry about too.

Ahhh yes! The final third of the film has been referred to as the “Horror” part but I disagree, slightly anyway. Although it’s a extremely horrific situation Gringo & company find themselves in, it felt more “Thriller” than “Horror” to me. Either way, the remaining survivors find themselves racing for help while being pursued by hardened criminals who’ve escaped from the local prison and are running roughshod through the town raping and pillaging as they go. It’s during this section of the film that the cast gets put through their paces and the audience has no clue as to who will survive. I don’t do spoilers so you ain’t gonna hear it from me but there’s an addition to the group in the form of a fireman who isn’t quite what he seems to be and he plays a big part towards the end of the film. People get set aflame, chopped up with an ax, shot, impaled & otherwise messed up during the final third of “AFTERSHOCK” and the film spares no grue whatsoever! It’s a bloody, gooey mess that elevates it far and above standard disaster fare. 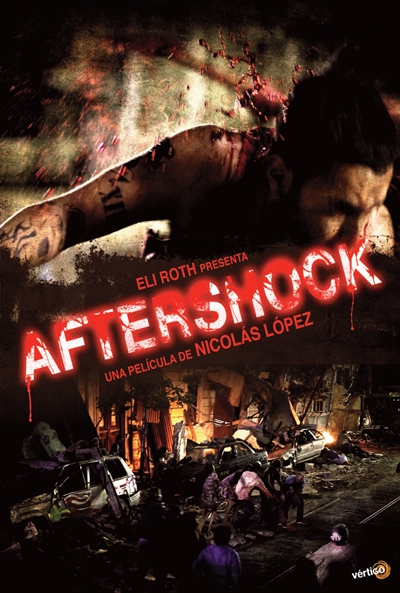 The performances are all first rate and there’s genuine chemistry between the six main characters that makes their eventual fate something the audience actually cares about. Roth surprised me with his portrayal of Gringo as a pseudo nerd and although I don’t think he’s gonna win any awards for acting anytime soon he’s really good here. Among the featured women, Osvárt is the stand out as Monica. She starts out as the party pooper but she becomes something of a heroine towards the end although that end isn’t exactly what she expected. There’s a funny cameo from Disney starlet Selena Gomez early on in the film that lends a bit of levity to the proceedings as well (I wonder where her character was when the shiz hit the fan though?)

And that takes me to that final shot of the film! Some will find it horrendous and some will find it hilarious, I thought it was pretty perfect myself (But I’m a truly warped individual) so take that opinion with a dash of salt. No matter what you might think of the end of “AFTERSHOCK” you WILL walk away from the theater talking about it and that’s what the filmmakers want you to do, it’s an incredibly polarizing way to end the film. I ended up liking “AFTERSHOCK” a lot more than I expected to and I’m sure it’s going to move the Earth under more than a few of you as well. See it this Mother’s day weekend with your moms!