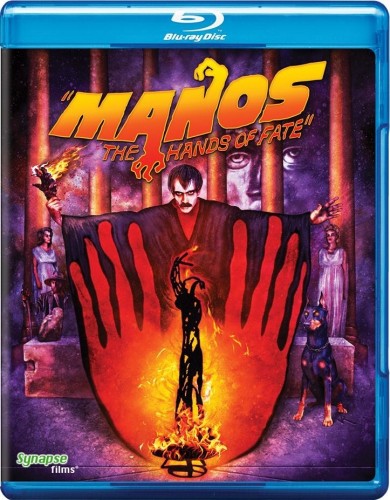 “A family driving through a small town gets lost and winds up at a backwoods shack managed by Torgo, who takes care of it while The Master is away. The Master worships Manos, an evil deity, and he also wears a neat cape. When Torgo lets the family stay, The Master awakens and does mean stuff like burning off Torgo’s hand and sicking his dog on the family pet. Meanwhile, The Master’s wives wrestle for his favor.” (courtesy IMDB)

Boy, do I have a treat for you this week – if ‘treat’ means ‘what you do with raw sewage’, that is. Some films are so bad, they’re good, meaning ‘fun’ or ‘entertaining’ or at least ‘interesting’. But few films can claim to be so bad that you actually feel physical pain while watching them. 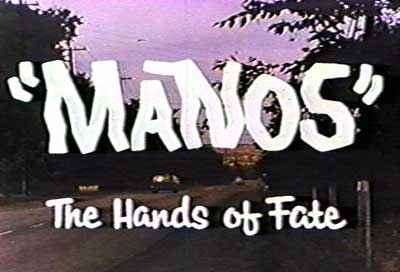 I’m convinced everyone in this week’s film suffers Attention Deficit Disorder. They continually flub lines, miss cues, stare into the camera, or aren’t even aware that they’re on camera for the first few seconds of many shots. If you watch carefully, you’ll also see the occasional clapperboard or director Hal Warren mouthing the word ‘cut’ a few times just before transitions, and there’s a cavalcade of uncomfortable silences while actors wait for their cues. So take the batteries out of that remote control and put them to better use, as we sit back and enjoy the root canal known as Manos The Hams Of Fat! I mean, Hands Of Fate (1966)! 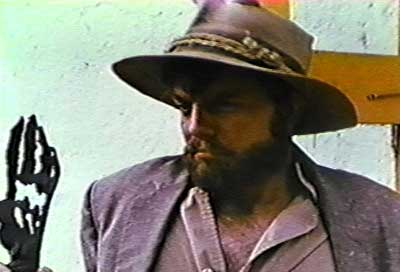 Needless to say, no-one involved with the production of Manos The Hems Of Frock ever worked in the film industry before or since. In fact, four of tonight’s actors had all committed suicide within a year of the film’s release: John Reynolds, Diane Mahree, Sherry Proctor and Joyce Molleur. Everyone worked without pay, but were promised huge percentages of the profits. You can guess how that worked out. 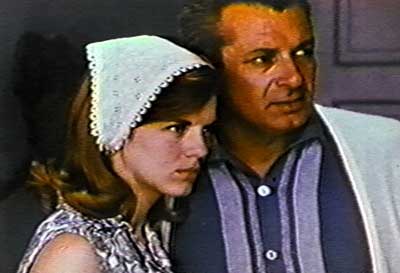 You see, fertiliser salesman Hal Warren met award-winning screenwriter Stirling Silliphant while scouting for film locations. Stirlo was given an Oscar for his script for In The Heat Of The Night (1967), and had it taken away again for writing The Poseidon Adventure (1972), The Towering Inferno (1974) and The Swarm (1978) for my old mate Irwin Allen. Anyway, next day Hal somehow got it into his head that he could give up the joyous world of fertiliser and make a movie just as good as anybody in Hollywood. Which is, of course, high-grade fertiliser in itself. 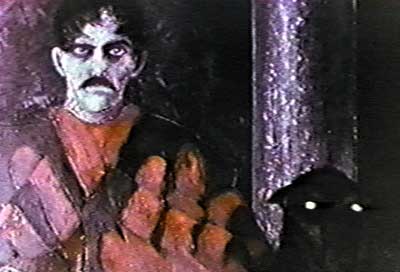 After scribbling a script on the back of an ice-cream wrapper, he rounded up a few college kids like Diane Mahree to play his wife, he would play husband Michael, and threw in child actress Jackie Neyman as little Debbie, which proved to be useful as her mum made all the costumes and her pet puppy played the hell-dog. Her father, Tom Neyman, plays Frank Zappa…I mean, The Master, and Hal found some actors at the local community theatre, including John Reynolds who plays Torgo the Satyr. John made the legs himself out of metal framing, but they’re never really seen properly. They were extremely painful to wear, which led to his becoming addicted to pain killers. Much like I will be after writing this. 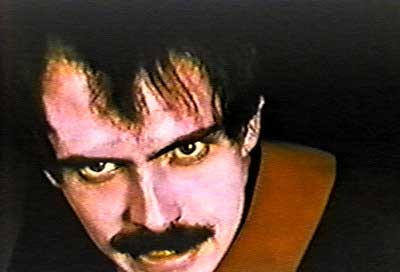 Unfortunately, the camera Hal chose to use was a 16mm Bell & Howell model that had to be cranked by hand, meaning it could only record film for roughly thirty seconds at a time. That explains most of the editing, though not all of it can be blamed on the camera. To make matters worse it couldn’t record sound, so all dialogue and sound effects were dubbed in later. Little Jackie cried when she first heard her own recorded voice, much like I did when I first saw this film – or would have, if I had tear ducts – or eyes.

Anyway, twenty thousand dollars later and voila! Hal somehow managed to get Manos booked in an actual cinema and even got a fair amount of publicity in the local press. However, at the first showing, audience laughter prompted the cast and crew to sneak out halfway through.

But I don’t want to give you any ideas – stay right where you are and prepare yourself for the nullifying climax of Manos The Hahns Of Lite. I’ll wait for you… 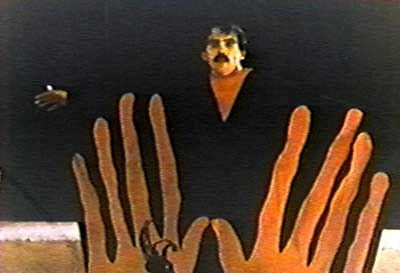 Right, have you finished watching the film yet? Congratulations, you have just endured Manos The Hands Of Felt, Quentin Tarantino’s favourite comedy of all time. By the way, the only person to gain anything out of this terrifying experience was little Jackie. She got a new bicycle, and all she had to do was become the eight-year-old bride of Satan. Typical Hollywood. I sold my soul and all I got was this lousy T-shirt. Enough crying over spilt blood, please join me next week when I have another opportunity to give your cinematic sensibilities a damn good thrashing with the ugly stick for…Horror News! Toodles!

Manos The Hands Of Fate is now available on bluray. Enjoy this classic cult film