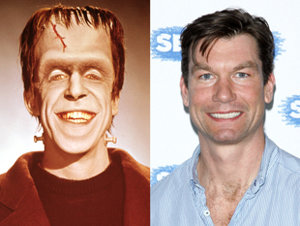 Just sent over from Universal, NBC is rebooting “The Munsters,” and you’ll never believe who is playing the family patriarch, Herman Munster. Or maybe you will, because he’s been on a slew of other shows already. Jerry O’Connell, best known for being married to Rebecca Romijn, will do his best to fill Fred Gwynne’s sizable shoes.

The show, which will be called “Mockingbird Lane,” will also feature Eddie Izzard as Grandpa Munster and Mason Cook as the werewolf Eddie. TVLine is reporting that the pilot episode will be directed by Bryan Singer (“X-Men,” “The Usual Suspects”).

O’Connell does have a few hits under his belt. He was the chubby kid, Vern, in “Stand by Me” and played stud quarterback Frank “I just wanna play football” Cushman in “Jerry Maguire.” He was also in “Sliders,” which lasted five seasons.

The “Munsters” reboot will be substantially different from the original. Instead of a half-hour sitcom, the new version will be a one-hour drama. We’re having a hard time picturing Frankenstein’s monster and his werewolf son really selling the drama in primetime, but we’ve been wrong before. The creator of “Mockingbird Lane,” Bryan Fuller, also created “Pushing Daisies,” a show that walked the line between whimsy and drama.

According to TheWrap.com, “The revamp has had a roundabout path to fruition. After initially greenlighting the project in September 2010, NBC brass initially passed on Fuller’s original script, but incoming NBC Entertainment chairman Robert Greenblatt was intrigued enough by the project to give it another go.” Greenblatt used to run Showtime, a network known for taking risks. Whether a more mainstream NBC audience will follow an edgier group of Munsters remains to be seen. The show is scheduled to begin shooting this month and may debut sometime next season.

Mockinbird Lane – 4 Clips to get your Munster on! 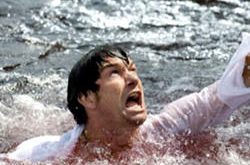