SYNOPSIS:
“Rich man Harold Gern (Antony Carbone), busy making money and spending it just as fast, is newly married with Evelyn (Betsy Jones-Moreland) and on his honeymoon in Puerto Rico. His lawyer Martin Joyce (Robert Towne) is there too on business to try and get him out of a situation with the government. Harold gambles a lot and one day decide to deal with the lawyer by going fishing and scuba diving. The three go underwater fishing and after a small accident with a spear-gun, they all come up to the boat. When they remove their air apparatus, they can’t breath. Keeping the air tanks, they go back to shore to find help. As they cross the jungle to get to town quicker, they run out of air, but they realize plants give out oxygen and they are able to breath once again. They discover that everyone, even animals, are all dead.” (courtesy IMDB)

REVIEW:
Some ideas are so self-evidently bad that you really have to marvel that anyone would actually bother to follow through on them. Somewhere not too far from the center of this category is the notion of making a movie about the end of the world on a budget so small that the tax break a producer used to be able to get for shooting in Puerto Rico becomes an economically compelling incentive. Also somewhere in that vast tract of territory is the idea of giving a just-starting-out screenwriter the extremely demanding job of writing a philosophical, character-driven script for a cast of only three people, most of which is confined to two rooms of a house and a deserted stretch of shoreline. Roger Corman was not daunted by such considerations, however, and thus it was that the world would have to contend with The Last Woman On Earth (1960), the trash-movie overlord’s misguided attempt to do The World The Flesh And The Devil (1959) with three actors, an empty house, and a handful of loose change. 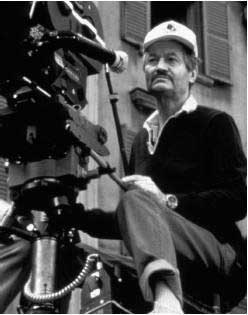 Antony Carbone, from A Bucket Of Blood (1959) and The Pit And The Pendulum (1961), plays shady and arrogant businessman Harold Gern on vacation in Puerto Rico with his wife Evelyn, played by Betsy Jones-Moreland, of Creature From The Haunted Sea (1961) and The Saga Of The Viking Women And Their Voyage To The Waters Of The Great Yada-Yada-Yada (1957). Evelyn is not having a good time. For one thing, her husband’s idea of a romantic evening out is to take her to see a c**kfight before moving on to the craps table at the casino on the first floor of their hotel. For another, Harold seems incapable of disengaging his mind from his work for more than a few minutes at a stretch.

Thus when the Gerns are accosted at the c**kfighting arena by lawyer Martin Joyce, played by screenwriter Robert Towne, Harold abandons his wife completely to talk with Martin over the latest indictment pending against him back home. Truth be told, Martin isn’t terribly happy with Harold, either, for despite his nearly monomaniacal dedication to his business, he can’t seem to be bothered to pay attention to whether or not his latest scheme for furthering it is actually legal. Through an odd chain of events, Martin and Evelyn wind up consoling each other up in the hotel room while Harold pursues his oscillating fortunes in the casino, and Martin gets brought along for the ride the next morning when the Gerns head out on their yacht for a bit of scuba diving.

As it happens, that frivolous little excursion means that Harold, Evelyn, and Martin are among the very, very few who survive the end of the world. While the three of them are down below, locked in mortal combat with the fearsome cow-nosed manta ray of the Caribbean, some unexplained bad business causes all the free oxygen in the lower atmosphere to disappear for a bit less than an hour. Cost-effective? Yes. Cinematic? Hardly. Our heroes get wise to the trouble when they climb back aboard the boat and start feeling faint the moment they spit out the mouthpieces of their air tanks. Returning to Puerto Rico with breathing tubes firmly back in place, they find the island devoid of all human and animal life. For that matter, there are precious few corpses in evidence, despite Martin’s alarmed pronouncement that the stench of decay will render the town where they had been staying uninhabitable within a day or two at most. Nor is there anything coming in over the radio to suggest that the mysterious catastrophe is confined to Puerto Rico. So far as Harold, Evelyn, and Martin can see, there’s a strong possibility that they may be the last three humans alive on Earth.

So, let’s take a moment now to assess this situation in some detail. First of all, we’ve got two men among our survivors of the apocalypse, but only one woman. Second, one of those men is married to the woman, but we’ve seen reason to believe that she would honestly prefer to be with the other one at this point. Finally, the two men have also established that their philosophies of life are more or less mutually antithetical. What do you suppose all this might mean for the remainder of the film? 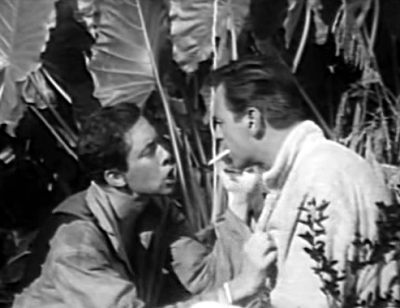 You got it! it’s a virtual non-stop three-way argument consuming nearly the whole of the remaining running time. How perceptive of you! Nothing ever gets resolved, really, even after one of the three survivors is killed at the end of a climax that seems to have been written mostly so as to take advantage of a location which Corman didn’t discover until the final days of the shoot. The endless bickering and circular philosophising lead absolutely nowhere, the two bursts of action devolve into chase sequences that attempt to substitute scenic interest for dramatic urgency, and in general, The Last Woman On Earth enjoys the distinction of being among its creator’s most pointless and uninteresting movies. If you’re left with the impression that Corman probably made this turkey solely as an excuse to take a two-week vacation in Puerto Rico, you’re not alone.

The Last Woman On Earth is a surprisingly literate movie. By saying literate I mean that The Last Woman On Earth has the feeling of a filmed play. A post-apocalyptic Tennessee Williams, a J.G. Ballard feeling pervades the proceedings as the trio faces desolate cities strewn with corpses. However, the movie’s low budget origins are very much in evidence – the screenplay has a rough feeling to it, as if it needed another rewrite. As is to be expected with the topic matter, The Last Woman On Earth makes for rather morose viewing, especially since director Corman wisely underplays the screenplay’s sensationalist aspects. One woman named Evelyn – get it? And two men! The ending is also rather heavy-handed in its unexpected sermonising.

Still, if you were expecting something as trashy and light-weight as Corman’s Attack Of The Giant Leeches (1959) or The Wasp Woman (1959) you’ll be pleasantly surprised – or disappointed, depending on your cinematic preferences. I suppose I was a bit of both. The Last Woman On Earth has a stolid science fiction premise and some okay directing and acting behind it, even if it wasn’t exactly a whole lot of fun to watch. Anyway, please join me next week when I have the opportunity to burst your blood vessels with another terror-filled excursion to the back side of…Horror News! Toodles!