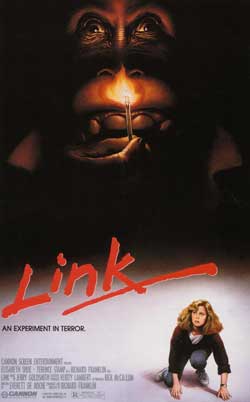 Jane is an American studying at the London College of Sciences; she finds and seeks employment from Dr. Phillip as his assistant. Dr. Phillip has a strange study that involves chimpanzees and their intelligence level. His experiments for the most part seem successful and he has learned that chimps although quite intelligent are also quite dangerous as well. Jane begins work at Dr. Phillips deep in the English countryside and finds that the good doctor is more than happy to take his work home as he takes care of three different chimps. The most impressive of these monkeys however is the one that Phillip calls Link. Link dresses and acts like a butler for the house and even smokes cigars. One day Link gets mad and Jane finds that she has to outsmart a monkey if she wants to see the next morning.

“Don’t worry you’ll be perfectly safe while I’m here!”
Franklin’s Link starts off with this whole POV sequence in which the viewer is a creature of some sort who is quite prone to chasing and killing cats and pigeons and terrifying young girls who are trying to watch a Kinks video. It is only after this sequence is finished that we get to meet Jane. 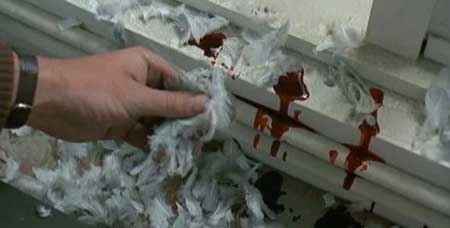 Jane is an American student who is studying in London. Although Jane is not scheduled a lecture with the famed Dr. Phillip she sneaks into them. Her boyfriend David actually is enrolled in the class which seems to focus on primates and their life styles. Jane creeps around Dr. Phillip hoping that she can get a job as one of his assistances. Dr. Phillip is quite well known in the study and Jane would see the experience as not just a way to make some spare cash (he only pays forty pounds a week) but also a way to study under someone who fascinates her. 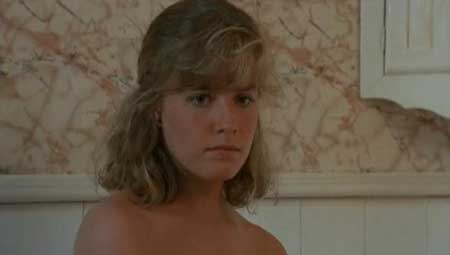 Dr. Phillips house where Jane is supposed to work is literally out into the English countryside. Yes the land and the house is beautiful, however wild dogs run loose and even from the beginning of the film anyone who is a fan of the genre can tell something terribly bad is going to happen.

So now we have the girl with a strange doctor at a remote location….where’s the monster? The monster in question is also the namesake of the film….Link. Link is one of the three chimpanzees that Dr. Phillip takes care of and does his research with. Although it doesn’t come right out and say it, it is fairly obvious through quite a few scenes that Dr. Phillip is quite harsh with his subjects. He shoots at one with a rifle; he threatens another with a stick. He also proceeds to have one of the chimps and Jane take an IQ test at the same time to prove that his monkeys are indeed smarter than average members of their species. 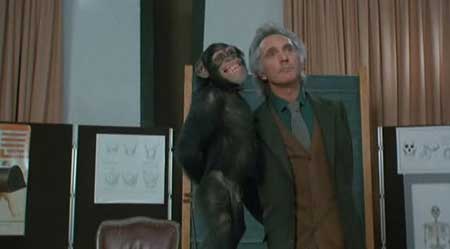 Eventually things get a little wild when the monkeys revolt with the help of Link and then become victims themselves as Link goes on a rampage which leaves several dead bodies and the young American trapped in a large house waiting for rescue. Part Cujo and part Dunstin Checks In Link is one of those movies that can really toy with its viewers emotions. When Link and the other chimps are first shown they seem to be cute and helpful, only to turn into savage killing machines nearly forty minutes later into the film. Link takes up most of the screen time and like the rest of the cast the chimp eats up the part. From rescuing Jane from a feral dog (quite a violent scene in itself) to pushing a van by himself so that Jane can attempt to pop the clutch to start it, this monkey eats up every second he’s on the screen. He even smokes cigars for crying out loud! 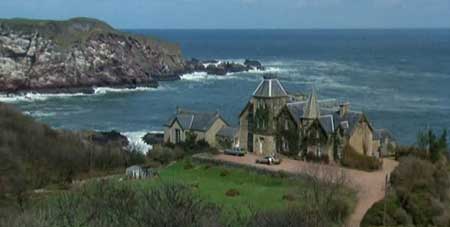 The location and cast for Link is relatively small and luckily the large house holds quite a few set pieces including a stereotypical mad scientist lab. The small cast really gets into their roles as well actually sucking the viewer into Jane’s plot even further. Top off it all off with some quality jump scenes (Link rips a persons arm through a mail slot!) and a pretty nifty score and you have a decent animal attack subgenre 80’s piece. Even those who aren’t entertained by the animal attack subgenre can still enjoy this one since Link is almost just as smart as his victims. 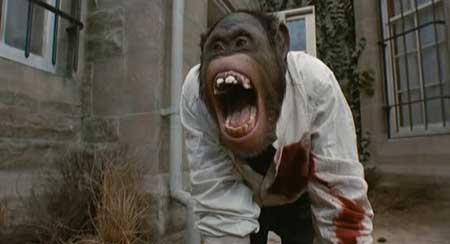 Also Richard Franklin has taken some liberties here and has filled the soundtrack and background with all sorts of monkey related items so this film really does cater to the primate lover that resides in most of us. The gore level on this one is quite low, but it does contain a monkey in a suit smoking a cigar so I think we can look past that one….this one should be checked out! 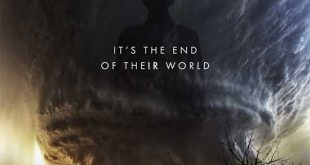 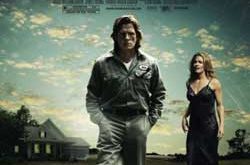