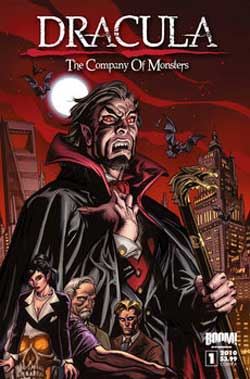 “He’s back from the dead and starring in a new ongoing horror series from the mind of Kurt Busiek. A powerful, predatory corporation acquires a valuable asset – Dracula! They think they own him, but no one can own the Son of the Dragon. There’s a monster in their midst that puts Hannibal Lecter to shame – and he plans to gain his freedom in blood. It’s bloodsuckers vs. bloodsucker, as Busiek brings an incredibly modern spin to the Dracula mythos.“

Artwork: 3.0 out of 5
I can’t really say that this is a bad-looking issue, because it isn’t. However nothing really stood out to me to move it up higher on my scale. The pages early on stood out a bit more as they were focused on Vlad Dracul, with some back story, but then it just seemed to dull down as we moved into present day. The cast is good from panel to panel, nice and consistent, but it all just seems to mimic the slow story. So it didn’t really grab me.

Story: 2.5 out of 5
I will just say it straight out, I was bored. I wasn’t sold on the concept in the first place, but wanted to check it out for the horror aspects of course. The pacing was slow, nothing ever jumped out and grabbed my interest. It just flowed from point a to point b with nothing exciting along the path. The dialogue was done well, as well as all the back story, but it just seemed so monotone. So I don’t know it would need to pick up fast in #2 for me to stay on board.

Dying Breath: 2.5 out of 5
So I wasn’t blown away. Instead I just found this #1 to be mediocre. It did a fine job of going from start to finish, but like I said nothing jumped out with the story or the art. Kind of Jurassic Park like to with the honey. So yeah I will read #2 to see what happens next, but I will do it with the mindset of passing on this series ahead of what may come next. I am also well aware that when I don’t care for a series everyone else seems to love it, so time will tell.

If you would like to buy or know more about Dracula: The Company of Monsters #1 you can find it at www.boom-studios.net/

Tags Dracula: The Company of Monsters