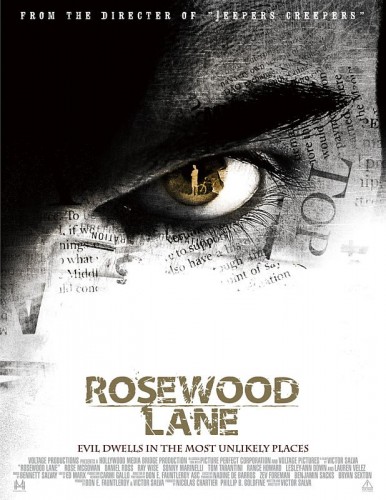 When radio talk show psychiatrist, Dr. Sonny Blake, moves back to her hometown, she takes notice of her neighborhood paper boy’s unusual behavior.

I hate the fact that these young actresses (or even the older ones) feel the need to have so much plastic surgery done. Now I know that Rose McGowan had surgery done to cover up a scar under her eye after a car accident. That is understandable. If you have seen her lately then you would know that she has had more than that done. I have always LOVED Rose McGowan but after seeing her in “Rosewood Lane”, she is almost unrecognizable. It’s a shame, I will miss the old Rose. I hate to admit it but I was actually distracted by her look. Hell, my wife came into the room halfway through the film and kept asking me what happened to her face. I will try to be fair to the film even though it was bothersome to see her looking like that.

Dr. Sonny Blake (Rose McGowan) moves into her childhood home a year after the death of her father. As she begins to settle in, she finds herself being tormented by her local…….paper boy. Derek (Daniel Ross Owens) has a weird way about selling the newspaper. He keeps showing up at her home and rather aggressively tries to sell her a subscription. Sonny isn’t interested but Derek will not take no for an answer. While working on her radio show, Sonny receives a phone call and the voice on the other end speaks in nursery rhymes. Her somewhat boyfriend Barrett (Sonny Marinelli) tries to help out but this kid is a sociopath. The police (Ray Wise and Tom Tarantini) don’t believe her, and her neighbors are all afraid of him. When things escalate, she has no one to turn to and she has no idea why he is tormenting her and how far he will go.

This is the first film that writer director Victor Salva has done since 2005’s “Peaceful Warrior”. Most horror fans will know Salva as the writer director of the “Jeepers Creepers” films. Now, I never really fell for those films. I appreciated the fact that he was trying to create a modern day horror villain in the vein of Freddy or Jason, for me, it just never worked. “Rosewood Lane” is a far departure from those films and more of a thriller. The pacing is much slower and the villain is a teenage boy. I did like much of the setup, there are hints that Derek could be some sort of supernatural entity which is a neat touch. The action takes place pretty much entirely around and in her home in a nice suburban neighborhood. Being terrorized in your own home is always a terrifying idea to think about.

The film isn’t very scary, though the thought of it is. One of the best sequences in the film arrives early on when our villain is introduced. I’m not really sure it held up throughout the film but there were moments. The cast was terrific though it was a bit disappointing to only see Lin Shaye for a few short moments. Ray Wise had a much larger role and honestly, I could watch the guy just sit and stare for twenty minutes and be entertained. Rose is a talented actress, though I was distracted by her appearance, her performance was still very good.

“Rosewood Lane” is a safe type of thriller. It is interesting enough to watch but never really breaks any new boundaries or push the envelope in any way. I guess if you and the lady (or man or however you like) are just hanging out on a boring night, this is a decent film to pass the time. Though I found it to be rather predictable and I saw the twist ending coming a mile away, it still manages to be somewhat fun. The cast for sure is a selling point. Not one to rush out for but if there isn’t much else to watch, what the hell, right? **1/2 (out of 5)