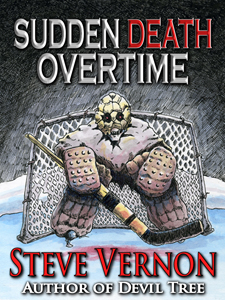 For the answer – throw Paul Newman’s Slapshot into a blender with Steven Niles 30 Days of Night and hit frappe!

Steve Vernon is the author of a dozen e-books of outrageously mind-blowing horror and dark fantasy including his horror/historical full length novel DEVIL TREE, the take-no-prisoners testosterone-fest superhero extravaganza NOTHING TO LOSE and the cult hit novella LONG HORN, BIG SHAGGY – A TALE OF WILD WEST TERROR AND REANIMATED BUFFALO.

Steve is a born storyteller who hits notes that hurt the ears of other notes. Also including the bonus time traveling hockey tale, “Time Out”.

“With SUDDEN DEATH OVERTIME, Vernon perfectly captures the dark heart of a Canadian Winter and the lifetime passion surrounding the game of hockey. He takes a group of old friends who never backed down from a fight on the ice when they were younger and still refuse to do so even when they’re old enough to know better. Toss on the rink some memorable characters, truly great dialogue, a bus load of nasty vampires, and a shocking surprise ending that you won’t see coming and you’ve got yourself a story that’s sure to be a winner.” – Gord Rollo – author of VALLEY OF THE SCARECROW.

When I received an email from Steve asking if I would like to read and review his new book “Sudden Death Overtime” I immediately responded back, most certainly.

C’mon…hockey and vampires, how could I resist. You all know how much I love vampires and as much as I love vampires, I love hockey just as much. Combining the two in a horror story is just brilliant in my opinion, especially if it is done right.

Steve Vernon gets it right. “Sudden Death Overtime” hit all the right notes with me. A wonderful cast of characters, great dialogue between the characters and an evil bus full of vicious vampires.

Reading “Sudden Death Overtime” brought back so many memories of my childhood and our backyard skating rink that our father would painstakingly work on for hours. We would spend hours out there in the winter playing hockey. Of course, we didn’t have a bus load of vampires to fend off…unfortunately.

The best part of the story is the group of “old guys” that still strap on the skates and maintain their backyard rink for the neighborhood children. Their love of hockey shines through in the way they communicate with each other and their willingness no matter how old they are getting to pass that love along to the next generation.

Characters are the driving force for me in any story and Steve’s characters are wonderful, life like and quite funny also. They also accept what is happening to them and use their knowledge from horror movies to take on the vampires.

The ending is nothing that I really expected and I thought it was perfectly fitting for the tale.

Also included is a short entitled “Time Out”, this one based on something very near and dear to my heart, street hockey. Though not a horror tale, it is a moving tale of youngsters doing exactly what I did when I was kid, play a lot of street hockey.

Again, Steve hits all the right notes and digs up some wonderful memories for me. I especially liked how he mentioned the chewed up orange street hockey ball. I think I still have bruises from some of those. Anyone who played street hockey growing up will know what I mean.

If you are hockey fan, vampire fan or just a fan of a good story, you will love these two tales. Steve really knows how to tell a story and I highly recommend both of these.

I must also comment on the cover art by Peter Francis, it is absolutely wonderful, captures the essence of the book perfectly.