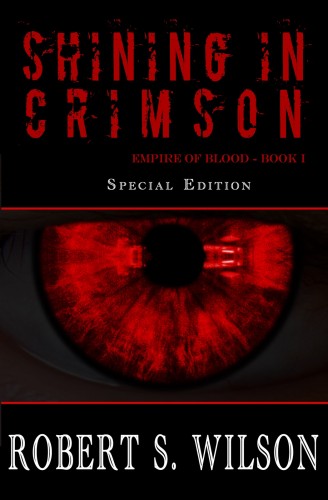 Synopsis:
Set in a dystopian, religiously-demented American Empire, the city of Las Vegas is no longer a city of sin. Now called Necropolis, it is a city that eats sin. The vampires of Necropolis wait patiently for the Empire’s weekly drop off of guilty Penitents; sinners and criminals full of fresh blood.

Hank Evans is one of those Penitents and he would gladly let the vampires take every drop of his blood if it weren’t for one detail: Toby. Toby is Hank’s only son. Now, Hank must do whatever it takes to escape the city of the dead and save his son from an Empire as bloodthirsty as the vampires it uses to keep its people in line.

Review:
When I was 16 I loved vampires. They were just about THE coolest things ever. Tragic and beautiful and dark and sexy. I was totally in love with the idea of being swept away in the arms of undead passion and give my soul and my blood to a predatory paramour.

And then I grew up and the idea of vampires began to get old. Angel brooded too much, Lestat preened too much, and Dracula was kind of boring and crusty. They just weren’t interesting anymore because vampires were everywhere and they were all the same and all the stories about them were the same.

About the time I realized that I was sick of star-crossed vamp/human love and repentant vamp detectives, I also realized I DID find some bloodthirsty maniac vamps like those found in “30 Days of Night” still fascinating. Because that is how vampires should be – bloodthirsty, supernatural, people-killing monsters. They shouldn’t be making friends with humans or falling in love with humans. Humans are food. They should be killing and eating them.

Even though my blind, all-consuming vamp love has gone the way of the Dodo and mullet rock, I try not to let my adult apathy toward them color my reviews too much. I know many people still love them and want to be whisked away into worlds filled with the blood drinking undead. But I DO find that I expect more from vampire books than I do other types of horror. More originality, more amazing characters, more snappy dialogue, more heart-pounding and terrifying and heart-breaking moments. Because there are a billion vampire books out there these days, and to make any of them worthwhile they need to be MORE than those that have come before. I have a hard time recommending something that doesn’t offer obvious levels of MORE.

Which brings me to “Shining in Crimson,” a vampire book set in a post-apocalyptic (sort of) world where religion rules the Empire of America, vampires rule Necropolis (formerly Las Vegas – kinda of fitting really), and criminals are sentenced to death by desanguination (basically they serve as dinner for the Necropolis inhabitants). This is a vampire book that does seem to strive for the MORE I was talking about. It gives us a new world where vamps and the government have political arrangements. Where even the smallest sin can lead to the gravest punishment, and where undead monsters can behave more civilly than human beings. It is an intriguing concept, but unfortunately it never seems to become totally believable or real for the reader.

First the vampires don’t make a whole lot of sense. There are two kinds – natural vampires and human vampires. Killing either kind seems almost impossible unless they are completely drained of blood, though luckily even that can be fixed if they get vamp blood quickly enough. They feed off each other as well as humans, though I don’t see what undead blood would do for them, and they are turned by venom (really?) from the natural vamps, though not everyone bitten gets this venom so not everyone turns, or something like that. They mythology here gets more than a little confusing, especially when the female natural vamp kind of makes an appearance and needs a human vamp to mate with.

The main human character, Hank, accidentally ingests vamp blood and becomes super powered for short periods of time. Not just a little super powered, but VERY super powered (like able to keep up with and even surpass the vamps full of their own super blood super powered). Eventually he is bitten and drained but comes back as a vamp, only to try and burn himself in the sun and come back again as … kind of human? It doesn’t make sense. I know it is fantasy and fiction and supernatural hocus pocus. But it still needs to make some kind of sense or else you just can’t believe in it.

I found myself getting a little bored with reading about a third of the way through and it was hard to stay focused after that. Though there is action on almost every page, the plot never seems to get anywhere. One endless night sees the characters running and talking and passing out on the brink of death and then getting up again to run and talk and pass out again. Nothing really important seems to happen until the last few pages, just as the story ends on a cliffhanger. I reached the end and felt like I had just read one overly long prologue.

There are some interesting elements to “Shining in Crimson,” but most of them have nothing to do with vampires and everything to do with the intriguing and brief glimpses of the new Empire society. I would have liked to have seen more of that because an America run by a religious zealot in what used to be considered a major part of the Free World has some very frightening possibilities.