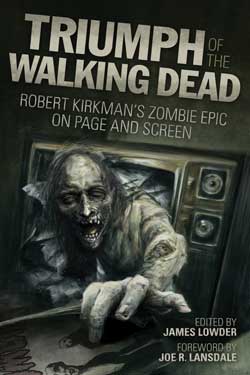 By now, the term “The Walking Dead” is far from being an obscurity with a hit series just finishing its 2nd season prepping for more. Editor James Lowder has assembled an interesting cast of writers in effort to put together different viewpoints and thoughts in relation to this zombie-filled series. The book is titled “Triumph of the Walking Dead”.

“Triumph” is divided into separate chapters providing a base for each of the authors essays. The chapters however range in subject focus. This focus is centered on “The Walking Dead” series as a foundation for literary direction.

As we begin, we are taken into the perspective of one who sees the series for what it is. A masterpiece of not just blood, gore and horror but of human drive and emotional bond. We are entertained with each of the characters and how they contribute to the whole.

Rick, the sheriff who is elected as the default resident leader even though his admitted drive and purpose is centered only on his family’s survival. The players who all bring a certain essence to the show and its range of dynamic interplay. We get “our” hero but he is broken and fragmented. He is a model of who we “assume” this role represents barring his flaws which give him character.

A world in chaos and the pack who’ll make do and move forward in the effort to just simply survive. Somewhere, somehow, they look for humanity and ways to make sense of it all.

The apocalypse, that fear of “what if”, how” and when”. This is also taken into account as the authors comment on a world gone awry and a how the few will survive the chaotic many. We are asked to look into our own realities and phantom the concepts of world-end struggles.

EC comics was a creator of zombie fiction. Their comics were in may ways the root to horror itself thru combining terror and illustration. Those were different times and because of that, many began to worry. This resulted in a comics code which has long now been abandoned. Though in the early days as we are told…there was paranoia with zombie labeling. The code is discussed and how it evolved the industry.

Chapter range from comparison to sympathizing to breaking down the walls of the multiple story arcs that populate the series. As the writers have a tv series to reference, it is in fact the comic series that they comment on. A comic series spanning much farther than the tv edition only just completing its 2nd season. The pages analyze different characters from the series and how they have responded to this new state of the world. While some reject the reality that dying brings. other stay optimistic that their loves ones will return to them…some sort of healing that will make everything alright. It’s a nice contrast of perspectives.

In summary, the book takes a extremely wide overview of that which relates to the “The Walking Dead” series itself. Readers will really enjoy the contrast from historic aspects all the way to scientific. Whether you are a zombie fan or not, the truth is…this is one complex and well laid drama. Much like I would compare any end of the world pandemic turning over. “Triumph of the Walking Dead” is a rich reading experience that while lacking any photos or illustrations is still engulfing enough to keep you clinging to its pages. The edition is one of the few books out now that takes an analytical view while still staying well within the scope of common reading. 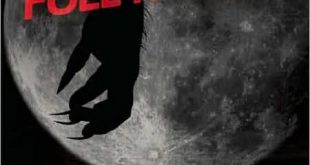 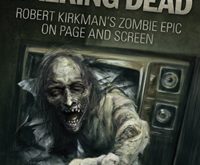