America the ugly. It used to be America the beautiful but somewhere along the line they tainted this land of ours. Our country is on the verge of a social and economic collapse the likes that we have never seen.

It’s like we are all the characters in a real life horror movie. I’m not a political person but you would have to be a blind not to see that the Government has failed “we the people”.

The former Governor of Minnesota, Jesse Ventura was denied his day in court when his airport security lawsuit was dismissed. In a press statement, he suggested he’ll turn his back on the national anthem and hold his fist up in defiance. I think this is a great country but the Government is riddled with corruption and greed. It doesn’t matter if you are republican or democrat, you’re candidate is controlled by big business. 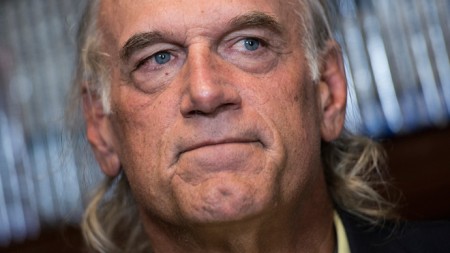 There are so many cover-ups and CONSPIRACY THEORIES out there that it’s a near impossible task to find the ultimate truth. We all need to raise our collective fists. The American people need to take back this country. If you look at everything going on with the OCCUPY movement, it reminds me of watching footage of Vietnam War protests. This is a war of a different sort. Did everyone witness the extreme violence of our peacekeepers ( the police ) as they beat and battered a military veteran? It plays out like the beginning of a bad independent science fiction movie that ultimately pits the police against the army in the barren wasteland’s of America. In this case, it’s the reality of modern times. Are we headed toward a new CIVIL WAR?

It’s probably a more believable scenario than most would actually believe. 2012 is at our doorstep and the apocalypse is on everyone’s mind. It’s not going to come down to a planet of talking apes or alien invasions, because our greatest threat is each other. There is no natural disaster that will come close to the damage that we can do to each other. I’m watching the news again and I witnessed another display inexcusable power as a protester was shot by a police officer while he was videotaping the front line of a police blockade. Now, when I say I was watching the news, I mean I’m watching Current TV as most news media turn a blind eye to what’s really going on. Remember, big brother is watching all of us.

There are video cameras at every corner where I live. It’s going to be communities of common friends that rise up out of the pending apocalypse and survive the new world order. Michael Bonedigger talks in the Horrornews.net forum about making a survival kit for when the masses hog up all of our resources. It’s true. It was only a couple months ago that the threat of a major hurricane sent everyone on the east coast into a panic, and because of it there wasn’t a single bottle of water available to purchase for miles. I can only imagine the mad rush to water and supplies if there were an actual emergency. Curious thing, the FEMA and the Emergency Broadcast System held a nationwide test the other day at 2pm. What are they preparing for?

This is going to sound strange, but I think the horror community might in fact be the most prepared for our inevitable downfall. I say this because of who we are and what we watch. In a sense, we’ve been preparing for this ever since the first time we watch George Romero’s Night of the Living Dead. Horror fans have watch so many apocalyptic scenarios that when a real emergency strikes, fans to will resort to survival techniques learned through countless hours of zombie and alien invasion movies. This article may be somewhat tongue and cheek, but the underlined danger is very real.

I guarantee this, when the sh*t hits the fan, Horrornews.net is going to there! Stay tunes to Unexplained Confidential of other HNN articles as 2012 gets closer.