SYNOPSIS:
“Peter Bogdanovich’s debut feature is a thinly disguised account of ex-marine Charles Whitman, who, after murdering his mother and his wife, armed himself with a number of rifles and handguns and on a sunny 1966 Texas morning, began a shooting spree that killed fourteen people and wounded thirty-two people. Bogdanovich’s version tells two stories concurrently, about an aging horror-film star who feels that his type of movie monster has become passé, and the other about a father-hating gun freak who goes on a rampage to get even with his dad by shooting at people from the top of a water tower and then from behind a drive-in movie screen.” (courtesy IMDB)

REVIEW:
Taking a page from his mentor Roger Corman, my old friend and director Peter Bogdanovich borrowed an actor and sequences from a Corman film in order to make his first feature, Targets (1968), virtually the last movie for Boris Karloff. Pete’s debut film is remarkable not only because of the sophisticated camera work by Laszlo Kovacs, but because it’s a Hollywood movie daring enough to have both an anti-Hollywood bias and a strong social message. Not since The Harder They Fall (1956) called for an act of Congress to outlaw boxing has a film made in wishy-washy Hollywood struck at a specific root of violence. Targets is is such a strong indictment of the proliferation of guns in America’s private sector that one would assume that Pete is calling for more than just gun control, but for a constitutional amendment that would repeal the American citizen’s right to bear arms altogether. Yet, strangely, Pete always insisted he never wanted to make a ‘message’ movie. 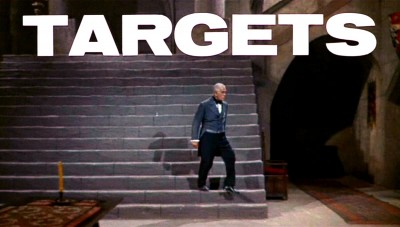 Pete’s first film was actually Voyage To The Planet Of Prehistoric Women (1968), but he cunningly used the non-de-blame of Derek Thomas. Pete is one of these directors who only has a certain amount of talent in him, that he saves for the special films. That’s why, after making Voyage To The Planet Of Prehistoric Women, he was able to make Targets with one of Karloff’s best performances, and then go on to make The Last Picture Show (1971), which unfortunately exhausted his talent supply. So he had to build it up again by making What’s Up Doc (1972) before he could make Paper Moon (1973), and that drained him so much he had to make Daisy Miller (1974) and At Long Last Love (1975), before he could even squeeze out Nickelodeon (1976). 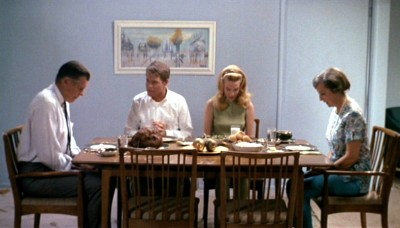 Targets has two seemingly unrelated story-lines that come together at the climax: While horror movie veteran Byron Orlok (Boris Karloff) prepares to make a personal appearance at a drive-in screening his latest film, Bobby Thompson Junior (Tim O’Kelly), an amateur gun enthusiast, goes crazy-ape-bonkers and shoots wife and mother, then shoots random highway motorists while hiding in a water tower with his cache of weapons, and ends up behind the screen of the drive-in showing Orlok’s film, shooting people as they sit in their cars.

When the sniper shoots through the screen on which The Terror (1963) starring the real Boris Karloff is being projected, we understand that Orlok was correct to complain that real life is more frightening than horror films. He also reminds us that, no matter how terrifying Bobby’s actions are, it’s only a movie we’re watching and doesn’t compare to the ‘real’ real thing. Targets is a unique motion picture full of subtle (and not-so-subtle) movie references, interesting offbeat touches and some frightening scenes: Watching Bobby kill his wife and gun down innocent people is chilling indeed, but the scariest sequence is when Bobby has such an easy time purchasing firearms. Based partly on real-life Texan tower sniper Charles Whitman, Bobby’s character in many ways anticipates Robert De Niro’s portrayal of Travis Bickle in Taxi Driver (1976).

Targets is an example of what the lanky greying director affectionately refers to as guerrilla film-making. I first met Pete when he was writing scripts for Roger Corman, undoubtedly the master of guerrilla film-making, but Targets offered Pete first-hand experience at the helm: “It was shot in twenty-three days and was a lot of fun – if you think of blind terror as being fun. Of all my pictures, it was the most consuming, on top of which we were doing it so fast. Unless you’re on a sound-stage or in a studio, making a picture in real-life is extremely difficult. You’re trying to bend reality.” 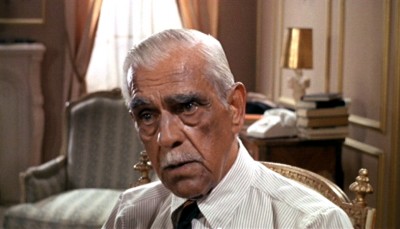 Later, when he made The Last Picture Show, Pete experienced similar real-life frustrations. “Some kids were playing in the yard a block-and-a-half away. I said to the assistant director. ‘Get those kids out of the yard’ and he said, ‘Hey, you kids, get out of your yard!’ For the initial sniper scene in Targets, we weren’t allowed to shoot on the freeway, there were no permits, but we did it anyway. It was a little dangerous, I don’t advise it. We had two cameras going at the same time to stage a sequence on the freeway, directed through walkie-talkies. You can never get away with that sort of thing with a big company, but we did it. If there was a car coming down the freeway I’d yell, ‘Shoot it!’ I’ve tried to recreate those days on other films. It’s important not to be too comfortable. The director Leo McCarey once told me that the perfect way to get into pictures was with a little bit of larceny.”

And it’s with that thought in mind I’ll quickly thank the Washington Post and Video Magazine for assisting me in my research for this article, and graciously invite you to please join me again next week when I have another opportunity to make your stomach turn and your flesh crawl with another lusting, slashing, ripping flesh-hungry, blood-mad massacre from the back side of…Horror News! Toodles! 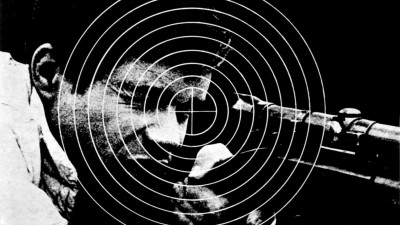