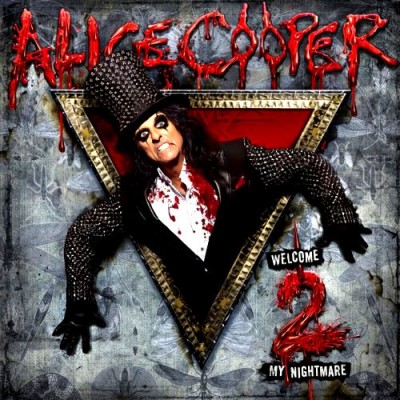 I’ve always been a pretty solid Alice Cooper fan. Though I will confess that my loyalty lies more in the earlier edgier releases of the 70’s. They were inventive, strange, and melodically creepy. A perfect union of horror and music. Alice has always been the iconic superhero of horror rock. In later years, I lost my rush as he became closer to 80’s metal, with cheesy lyrics and a band who seemed more like hired guns than the former “Alice Copper Band”. It is with great respect and excitement I can announce the long-at-last return to his true roots. Even with his last few releases which were announced as a “return”, I wasn’t feeling it. It was a recent article in Rue Morgue that I learned of the return of his former producer Bob Ezrin and a few old band mates from the early days.

Was this to be the “real” Alice Cooper we lost over the years? “Welcome 2 My Nightmare” (2011) is in fact that return in spades. It’s opener track “I am Made of You” (though using modern means) is a fantastic song that I predict will be a single in itself (or should be). But moving forward, we expect a certain craziness in lyrical and song content which arrives very comfortably in its following tracks. The theme returns the story of “Steven” to his nightmare scenario. So we get a pretty solid helping of scary bits, strong song writing and the kind of content that Alice is known for.

“A Runaway Train”
takes on a more hillbilly-rock approach as it races towards it proclamation “I’m on the wrong side of the dirt”…good one Alice!

“Last Man on Earth”
Reminds me alot of the kind of song you’d expect to emerge from a movie musical number such as a Tim Burton style of film.

“I Bite Your Face Off”
The track being promoted as one of the release’s singles. Though to be honest “personally” it’s also one of my least favorites. I just can’t get past its simple repetitive chorus (to much annoyance)…sorry (it reminds me more of those stupid songs from the “Man Behind the Mask” era.

“Disco Blood bath Boogie Fever”
Not really sure what to think of this one. Am I the only one that thinks that its the type of song you imagine emerging from a Muppets ensemble sing along? Still its got sass and attitude which saves it from kiddie jingle hell.

“Ghouls Gone Wild”
Kind of reminds me of “The Wiggles” but with a touch of Alice seeping into its party song mix. Ya, “Wiggles”…I could see this one on there.

“Something to Remember me by”
The CD ballad taking us back to the days of “How You Gonna See Me Now?”. A moving tune that while being a love ballad falls beneath some of Alice’s more known slow pieces in the past, but still a pretty decent tune.

“The Underture”
One of my favorites from the collection here, simply a musical that pays tribute to the many notable tracks from the Nightmare years including a few of the new songs. Very cool indeed!

Vocal tone and music production are clearly a prodict of producer Bob Ezrin’s handy work keeping everything tight, large, and hard rock centered. I wouldn’t call every song on this release a keeper. Though what stands out is the consistent sound and production level that keeps you engaged long enough to skip to the tracks you do like. Overall the best release I’ve heard in years from AC.