“These guys know more about the undead than I do… and that’s saying something, because I’ve been hanging out with zombies for as long as I can remember.”

“This is the best of modern zombie fiction. If you want the best, you need to read the stuff these guys are putting out at PRINT IS DEAD. It doesn’t get any better than this.”

‎”PRINT IS DEAD is the terrifying new voice of zombie fiction. They’re coming to get you…”

Creeping Hemlock/PRINT IS DEAD recently published their first three titles, which are available to order wherever books are sold.

“Pray to Stay Dead reads like a lost seventies Grindhouse flick,” says PRINT IS DEAD editor and Creeping Hemlock co-founder, RJ Sevin. “It’s dedicated to George A. Romero, Tobe Hooper, and Jack Ketchum, and with good reason—it’s got a gritty nastiness that calls to mind seventies cinema and a literary tone that evokes the very best that horror fiction has to offer.

“Scavengers is, for my money, the most exciting zombie novel since Keene’s The Rising. It’s got a ton of heart and a relentless drive that just doesn’t stop, and we can’t wait to see what Nate does next.

“World in Red is, quite simply, one of the most savage horror novels I’ve ever read. Gorumba has taken to inscribing signed copies with a simple warning, Prepare to Despair, and you should—there haven’t been many horror novels this exhausting, this bleak, and this well-written. If it had come out in the eighties, it would be considered a Splatterpunk masterpiece today.”

Creeping Hemlock Press/PRINT IS DEAD are currently prepping several titles for release in late 2011 and beyond.

“We’ve got lots of exciting projects planned. Our first three novels have been very well received. We think they’re among the best zombie novels ever written, and our readers seem to feel the same way. And this is just the beginning…”

October will see the release the darkly comedic Reanimated Americans by Martin A. Mundt.

Early 2012 brings a short story collection by Stoker- and International Horror Guild-winning author Gary A. Braunbeck, featuring the modern zombie classic, “We Now Pause for Station Identification,” as well as an all-new novella.

Also on tap for early 2012: The Living, an action-packed futuristic zombie thriller by Kealan Patrick Burke, who Publishers Weekly called “a newcomer worth watching.”

In addition to these novels (and a few more that have not been announced), PRINT IS DEAD will release Zombie Digest, an ambitious 12-part novella series.

“Zombie Digest is going to be incredible,” says RJ Sevin. “Twelve novellas by some of the best writers working today, each story wildly different from the one before it. I can’t say much else about it right now, except that the opening novella is by Tom Piccirilli and it’s fantastic. And there will be a serialized bonus novella by Nate Southard, running throughout all twelve volumes.”

“Too early to say. Among other things, we’re developing no fewer than four projects with Joe McKinney, one of which is a graphic novel. It’s a good time to be dead.”

PRINT IS DEAD books are available to order wherever books are sold. Signed copies can be purchased directly through www.printisdead.com. Ebooks available through Amazon.com and BN.com.

Contact RJ Sevin at rjsevin@creepinghemlock.com with any questions or requests.

Creeping Hemlock Press was founded in New Orleans by the husband-and-wife creative duo RJ and Julia Sevin. As sometime writers, oftentime readers, they found themselves frustrated with the scarcity of generous-paying, atmospheric short story anthologies. They took matters into their own hands in late 2004 when they began to accept submissions for their own anthology. Many months, one baby, two hurricanes, and one soggy home later, Corpse Blossoms was born to critical success and a nomination for the Horror Writers Association’s Bram Stoker award.

As their homeless wanderings carried them to Texas and back, the Sevins also produced an original limited-edition novella by Tom Piccirilli, Frayed, to terrific reviews and enthusiastic reader sentiment. The December 2007 release of Piccirilli’s The Fever Kill brought them into an entire new league of publishers. Critically lauded and carried in bookstores nationwide, this popular title has sold far beyond expectations.

Not long after the release of The Fever Kill, the press released two zombie chapbooks – Thin Them Out (a collaboration between the Sevins and zombie lit master Kim Paffenroth) and Flesh Is Fleeting… Art Is Forever! by Gary A. Braunbeck.

The chapbooks were unveiled to much acclaim at Zombie Fest, in the hallowed halls of the Monroeville Mall (the mall location used in George Romero’s classic, DAWN OF THE DEAD). Thin Them Out went on to be reprinted in J.J. Adams’s epic zombie anthology, The Living Dead II, and the Sevins found themselves surrounded by the living dead. The seeds for PRINT IS DEAD were planted…

Even before the disaster and reaction surrounding Katrina demonstrated its true meaning, charity was a pillar of Creeping Hemlock Press’s philosophy and business model. The press dedicates 10% of earnings to various charities. Your purchase from Creeping Hemlock Press or any bookseller carrying the press’s titles will help to benefit those in need.

The Summer of Love is a fading memory, the Cold War rages on, Richard M. Nixon is barely holding onto the Presidency, and the dead are returning to life.

Five friends on their way to a week at Lake Tahoe, a Vietnam veteran in Sacramento trying to get home to his daughter in New Mexico, an older couple idling in a dusty shop in the hills, and a dangerous man who has spent twenty years preparing his strange family for the end of the world.

As civilization collapses, these scattered survivors cross paths, and the hungry dead are the least of the horrors unleashed.

Those who die will walk. Those who live will hope for a quick death, and they will PRAY TO STAY DEAD.

“Mason James Cole knocked me back on my heels… PRAY TO STAY DEAD possesses an elegantly simple style of storytelling that I haven’t found since my first encounter with Jack Ketchum. Mason James Cole is that good. Read Pray to Stay Dead, and then pray this guy writes more soon, because he’s the real deal.”

– Joe McKinney, author of DEAD CITY and APOCALYPSE OF THE DEAD 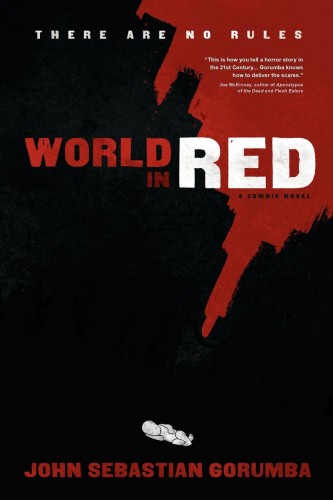 THERE IS NO EXPLANATION

Across the world, the recently dead rise and attack the living. Within forty-eight hours, civilization has collapsed.

THERE ARE NO RULES

The dead behave erratically-some are mindless, ranting animals. Some are slow and stupid, while others are swift and cunning. Sometimes, it is impossible to tell the living from the dead.

THERE IS NO HOPE

The savage, hungry dead are everywhere. There is no place to run, nowhere to hide, and living soon become far more dangerous than the undead.

As New Orleans burns, a father struggles to save his newborn son from any of a hundred unimaginable fates, all the while fighting to hold on to what is left of his own humanity.

WORLD IN RED is an unflinching and unpredictable excursion into horror, a terrifying journey that honors the conventions of the zombie genre while turning them upside down and ripping out their guts.

You are not prepared for WORLD IN RED.

“Almost unbearably bleak, WORLD IN RED is a can’t-miss debut from newcomer John Gorumba. Harrowing and unapologetically brutal, this is a hardcore zombie book for hardcore horror fans.”

“This is how you tell a horror story in the 21st Century. John Sebastian Gorumba’s WORLD IN RED is savagely cruel, but beneath the violence is a profound understanding of how easy it is to lose one’s humanity in our modern world. I can’t wait to see where Gorumba goes from here, because this guy knows how to deliver the scares.”

– Joe McKinney, author of APOCALYPSE OF THE DEAD and FLESH EATERS 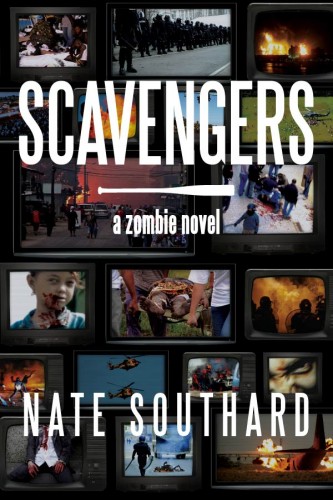 Millwood was a good place to be when the dead rose.

It was small, isolated, and easy to defend. The survivors there forged a community, weathered what came, and began to prosper.

But then they ran out of food.

Now, Millwood is sending five men to the neighboring town of Rundberg, a place ruled by three thousand living dead, to find enough food to save their community.

Five against three thousand? They don’t stand a chance.

“Nate Southard is one of the best new writers of his generation, and something new by him is always cause for celebration. I’m a big fan.”

– Brian Keene, author of THE RISING and GHOUL

By Martin A. Mundt

Jett Ahrens has just joined the Zombie Division of the Census Bureau, hoping for a dull, uncomplicated job counting the country’s newest citizens—the Living Dead. Y’know: Zombies, Rotters, Grave Potatoes, but don’t call them any of those names. They’re Reanimated Americans, and they aren’t anything like their cinematic counterparts—they don’t eat your flesh or want your brains. They just… stand around. Loitering. Stinking up the place.

Easy enough, yeah, but one of Jett’s partners might be a little nuts, and then there’s the serial re-killer going around town and setting walking dead folks on fire. Not to mention the Red Death Gang transforming the undead into works of art. Or the pair of psychotic cops tracking the serial re-killer and wreaking havoc of their own.

Or the nasty secret Jett keeps in a rental storage unit…

A biting satire about how civilization might cope with its most popular boogieman, Reanimated Americans by Martin A. Mundt will send a chill down the spines of zombie-lovers and bureaucracy-fearers everywhere.

-John Everson, author of SIREN and THE PUMPKIN MAN

“Martin Mundt writes like no one on earth, and mankind is much the better

-Bill Breedlove, author of HOW TO DIE WELL

“Martin Mundt is a nasty, warped, zero-termperature so-and-so who can’t put two words together without first snickering, then slitting their throats. This guy is far too hip for his own good. No wonder reading him is such a pleasure.”

-Peter Straub, author of A DARK MATTER and THE TALISMAN (with Stephen King)

To stay informed about Creeping Hemlock’s newest deals and sauciest news, subscribe to the Creeping Hemlock Press Newsletter. If you wish, you can elect to only receive news about certain projects.