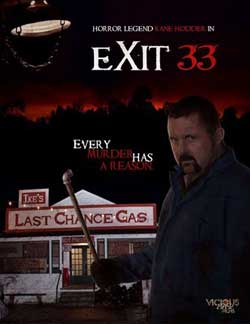 A few miles off EXIT 33, lies IKE’S LAST CHANCE GAS. A secluded sleepy hideaway where Ike prepares a special jerky for customers, and a terrifying secret. Ike and his son are controlled by a mysterious ghost, whose bidding lead Ike to abduct and torture beautiful women travelers. But, there is more to this story than meets the eye… literally!

You know acolytes, there ought to be a law preventing individuals with a camera & a little money from attempting to make a feature film. I just got through the atrociousness of “Paranoid Activity 2” thinking “It can’t get worse than this” and then I find that next up on my docket was a little ditty called “Exit 33”. I have to admit that it’s not as bad as “Paranoid Activity 2”, but it’s really close. Really, really close. But it does have one saving grace in it that saves it from being a complete waste of time.

The film deals with 5 people headed towards their 5 year high school reunion. First things first, I graduated high school when I was 17. Five years later I still looked like a teenager basically. The people here look a lot older than people who graduated high school five years earlier. But you get a lot of that in this type of film, actors who are older than their characters are, so I’m used to that. But the key word in that previous sentence is “Actors”. You see, no one in this film could act their way out of a paper bag with holes in it. They are, as a group, terrible actors who are probably friends of the director. They aren’t even particularly attractive save for Antoinette Nikprelaj who plays Angie. The film opens with Angie & her boyfriend Matt (Jerry Reid) apparently having sex but since she’s got her underwear on I have to wonder what all the moaning & groaning was all about. In addition, there is no way on god’s green earth that a schlub like Matt could ever get a looker like Angie. He looks like a reject from a Beatles cover band with a nose that rivals Adrien Brody’s as the biggest on an actor ever. 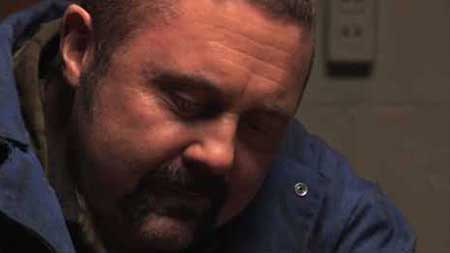 Matt claims that he can’t go to the reunion with Angie because he has to help his dad build a deck. But he secretly plans to follow her to the shindig to pop the question to her. As she pulls off, he takes the ring out of his pocket & gazes at it lovingly, hoping she’ll accept. He then jumps into his car to follow her to the reunion. Now since she just left 10 seconds before he did, I didn’t understand how she didn’t see him directly behind her. He must’ve had that car from “SuperHybrid” that could change it’s appearance whenever it felt like it (If you don’t know what I’m referring to, read my review for “SuperHybrid”). There are three other people headed to this reunion & strangely enough all of them have to get off of the main road at exit 33 for one reason or another. A couple of them do because they’re out of gas & the (Hand Written) exit 33 sign claims that it’s their “Last chance for gas”. But the others just take the exit. The exit that puts them on a dirt road. I mean it’s obvious the filmmakers had to get them to take the exit because that’s where all the action takes place. But in reality, no one is going to come off of a highway to get on a dirt road because there’s a hand written sign that says “Exit 33-Last chance for gas”. Nobody in their right mind anyway.

And where does exit 33 lead them to? It leads them to Ike’s Last Chance Gas station & it’s here that we’re introduced to the film’s saving grace. Ike is played by genre veteran Kane Hodder. We are introduced to Ike as he’s reading an issue of Fangoria magazine with “Jason X” on the cover. Ike flips through it briefly before tossing it to the side & remarking “Yeah, that’s scary” in a condescending tone. A nice little in-joke for those who are familiar with Mr. Hodder’s work. Now here is how it works once you pull into Ike’s for gas: If he likes you, he instructs you to use pump #3. If he doesn’t, he sends you to pump #9. Apparently this pump puts water in your engine or something because soon after you pull out of the station, your car stalls. Then Ike appears ostensibly to help you out but what he does is knock you out & bring you back to the station for nefarious purposes. Did I mention Ike makes homemade beef jerky? 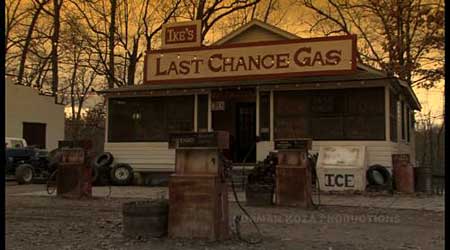 But that’s not the only thing he does to his victims. He also collects their eyes. Why? It doesn’t really matter & it’s actually pretty silly to boot. But it involves the ghost(!) of his dead wife who died in a hunting accident. And so the film just plods along with everyone stopping off at Ike’s for some gas or looking for their friends. How they would know to get off at exit 33 to look for them is beyond me but that’s how it goes. The film is actually boring at times but amazingly enough I stayed awake through it on my first viewing. This was because of Hodder’s performance, which is actually quite good. It’s a shame that the majority of his work as an actor takes place with a mask over his face because he really does have some acting chops. He is by far the best thing in the film. I actually wondered how the producers got him for this movie. Did he owe them a favor perhaps? Or maybe he just saw this as a role he could sink his teeth into, low budget be damned. Either way, he is very good as Ike.

Now back to my statement in the opening of this review chastising people with a camera & a bit of cash trying to make a movie. The movie was produced & written by one Norman Koza. As a matter of fact as I scanned the closing credits I noticed all sorts of Koza’s in varying roles both in front of & behind the camera. I also saw some of the cast members doing double duty behind the camera as well. So it’s a very low budget movie that’s apparently a labor of love from Norman & his cohorts. Unfortunately, none of them know much about making movies. The cinematography (By Michael Kudreiko) is absolutely atrocious, with shots out of focus & an almost comical overuse of the zoom lens for closeup’s (Shades of Jess Franco)! The film also looks ugly, plain & simple. But maybe this is what they were going for…I’m not sure. There is also a hilarious scene of two of our victims driving to the reunion in what has to be one of the worst rear projection shots ever put to film. What were they thinking when they shot this scene? It’s not a short scene either but it serves the plot no service whatsoever. It’s as if they did it to show that they could do it, but they can’t. The dialog doesn’t propel the story either, all it does is make two annoying characters more annoying. I wanted them to die so badly… 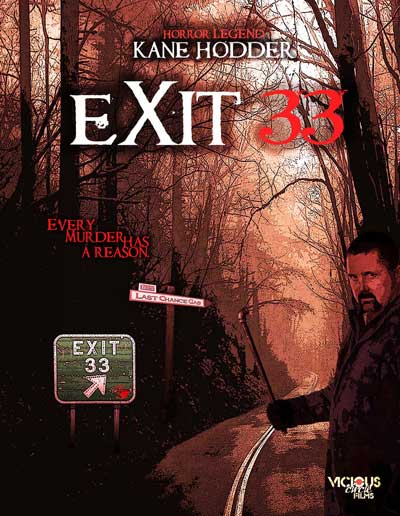 And they do, which leads us to the gore in the film. It’s actually not too shabby if your expectations are low. Some of the effects are pretty effective & some of them are pretty cheap looking & obvious. But I’ve seen worse so I wasn’t too disappointed in that regard. Kane is right at home slicing & dicing his victims as well. He also knows how to sell a punch to the face (Which he does a lot here). When Kane punches someone, it looks like they’ve been punched! The only reason to watch the movie is for Kane actually unless you’re someone who just has to see every horror film that comes down the pike. He really can act & I hope to see him in bigger films that showcase his acting ability. I met him a few years ago at a party & he seemed to enjoy following me around and throttling me or wrapping his forearm around my neck & squeezing every so slightly. He kept doing it too, just sneaking up on me & grabbing my neck. I think he enjoyed my utter fright at being attacked by the man who IS Jason Voorhees. He is indeed larger than life in person & a wonderfully nice man to chat with when he isn’t trying to kill you.

The one other thing I’d like to make note of in this movie is the soundtrack which actually features some pretty cool tunes. I’m actually going to look up some of them & see if they’re available for download, they’re that good. But that’s all the good I could find in this movie: Kane Hodder, the music & some halfway decent gore. Everything else sucked the big one. Sadly, the script isn’t strong or smart enough to make it worth more than one watch and the “Twist” at the end is just plain silly. Kane deserves better & I hope he gets it one day. Without a mask on either.

The Black Saint is giving “Exit 33” 1 1/2 shrouds for Kane’s performance & the kicking soundtrack. I checked on IMDB & the estimated budget on this was $1 million dollars. No f*cking way this cost that much unless Kane got $950,000 of it, which I doubt. So I wonder where all that “Estimated” money really went? Just curious….See it if you’re a Hodder fan, otherwise ignore it. You’re not missing much at all.