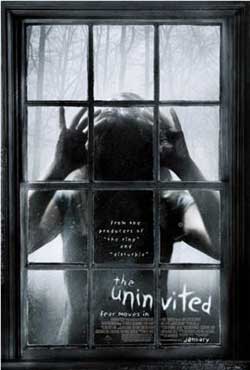 The Uninvited tells the tale of former loony-bin inhabitant Anna, who is just being released from an institution after the fiery death of her nightmare-inducing, sickly mother. While happy to be back with her sister, she is very wary of her father’s new girlfriend, Rachael, a (super attractive) nurse who took care of her mother up until the explosiony accident, and is now living in her freakishly peaceful house as her step-mom-to-be. Rachael seems to be hiding something, and the sisters begin to believe that Rachael is responsible for the fire that exploded their mom. This sparks (get it?) the Nancy Drew in Anna and her sister to unravel the plot to uncover the secrets of some scary-ass ghosts. As the determined sisters dig through Rachael’s past, more clues develop and Anna finds herself finding more and more relevance to her spectral visitor’s spooky meanings.

Yeah, I liked it. I mean, I’m not going to go buy it flowers or anything, though. I was not expecting too much considering I thought it was going to be some cheesy-ass, PG-13 sh*tfest like all the rest of these types of movies but I ended up fairly glad I took a chance on this. I was pleasantly surprise to find it had a little more meat on its bones than your typical teenage thriller. We caught the last showing at about 10:50pm on a whim and I couldn’t have been more pleased with our frivolous theater patronage. This flick was pretty creepzilla throughout. It wasn’t overly supernatural and it didn’t try to outsmart me (damn, Home Alone and its complex web of a plot), it just dug deeper and deeper into unsettlingness. It wasn’t the best movie I’ve seen and there was a slight overabundance of predictability but, to my surprise, I didn’t feel like putting the popcorn bucket over my head and stage diving into the people in the rows below me …again.

The initial story itself is pretty bland. The same “bad step-parent” setup has been done so many times, but there is enough difference between this and everything else of its kind to stop it from being too stagnant. We are teased constantly by what we perceive to be reality as the happenings shift between horrific dream-like sequences and real life. By the final chapter of the movie I was so into (Elizabeth Banks) the unfolding revelations that I felt like I was drunk (I was). The ghostly elements stitched the story together well, combining horror and suspense with the very real threat of the evil step-parent.

I thought all of the actors did a fine job portraying both vulnerability and strength simultaneously. The conflict is done very realistically both from the evolution of plot and performance of the actors. Emily Browning was perfect as an innocent and lonely girl able to show her somber moods and elevating fears on her face. She made it very easy to feel for her and be frightened for her. The amazingly beautiful Elizabeth Banks (marry me) perfectly held her secrets behind a menacing smile and the appearance of having good intentions. She did an amazing job playing the part of the creepy villainess by keeping it subtle. The location also played an integral part, I thought, in showing serenity all the while underlined with tension. Everything was visually stunning, especially Elizabeth Banks …sorry, I’ll try and stop.

As this is a horror movie website I feel I should emphasize a bit on the horror aspects of this movie. The horrific dream sequences that Anna experiences are pretty f*cked up. We get mutilated child heads talking to her, freaky dead kids randomly walking around and then disappearing only to appear again down the road, horrible mangled corpses and, of course, dear, sweet, deceased mum crawling across the bedroom floor in the middle of the goddamned night. The directors really did a fine job crafting some pretty scary visuals and it isn’t gratuitous, it actually helps the story evolve. A lot of times when we get ghosts or ghouls they seem simply for the sake of the visuals, but these were very much for the sake of the story.

As far as the ending goes, I won’t spoil things, but will tell you that I probably had a sh*t-eating grin across my face during the final twenty minutes. It completely came out of nowhere like a security guard who saw me grab a bottle of Wild Turkey from behind the bar. It was one of those endings that dropped clues the entire way but I was just too busy thinking about Elizabeth Ba… never mind. I was completely caught off-guard and I thought the final scene was a very good closing for this flick.

The Uninvited was a very nice change from the generic, bastardized PG-13 bullsh*t horror that plagues our marques. The chilling Hitchcockian atmosphere, the serene locations, and the nicely developed characters make this movie pretty damn watchable, not to mention the ending, which was a nice, refreshing backhanded smack in the mouth.