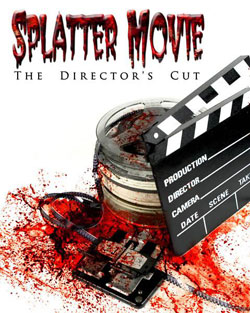 A group of filmmakers shooting their latest horror movie are unaware that they’re being stalked and killed by a maniac posing as a member of the crew.

“Oh, he came while you were filming the orgasm scene, he brought cookies…”
–Stacy

Filmmakers are fascinated with themselves. The film industry has told many stories about itself over the years on any number of subjects, horror included. The average audience member isn’t as interested in the movie business as unless there is a story there that holds their interest; makes them want to see more. “Splatter Movie” has enough going for it to keep the viewers’ attention. All the trappings of the current horror gene are here, gore, comedy, lesbians and a little nudity. 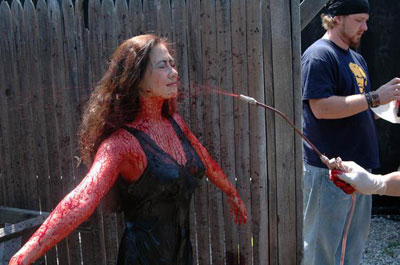 Writer Mike Watt and Director/Actress Amy Lynn Best add some analyst discourse and self-awareness to the classic slasher formula. The DVD that this reviewer received was called “Work in Progress” and truly some careful editing here and there would improve the film and give it a chance to really be a cult classic.

A fictional director (Amy Lynn Best) and her crew are being filmed by a documentary filmmaker as they try to make the low budget movie “Tesseract” in a horror scream park. The Hundred Acres Manor in PA serves as the real life location for this movie within a movie and adds to the appearance and staging of the horror to come. The setting is eerie with its ending maze and winding hallways with bodies fake and real around every turn. The movie has a large body count and some unique kills to its credit, which are better seen than described (but I am sure the hook through the chin will be a favorite). There is enough blood flowing to keep “Jason” fans happy.

Keeping with a post-“Scream” horror film it uses some of the conventions of a Slasher movie to twist them around for laughs while keeping the intended audience happy with the expected scenes. The actresses talking about nudity in movies and their take on lesbian scenes are entertaining, but “Splatter Movie” is never as smart a movie as it thinks it is; but does come close with the mix of documentary footage, “movie” footage and “real” time footage. The perspective of the movie changes many times and comes back around full circle. 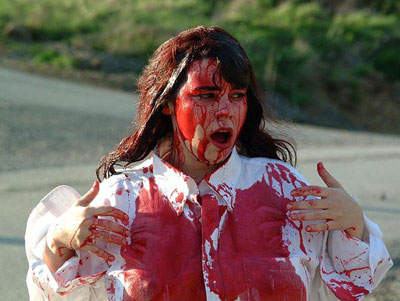 – Debbie Rochen’s rape scene (enough said).
– The kill with the victim hanging upside down from a fence.
– The wonderful location.
– Tom Sullivan (Evil Dead effects man) as one of the actors, he is just a natural.

-The pacing is a little slow at times and could use another edit to make it flow better.
-Some of the kill scenes need to be edited to be a little faster. Some of the actors seem to freeze as if they think the effect is over.

A fun movie which at times will make you think twice about what we really love about horror movies and yet gives us nudity, spanking, gore effects, lesbians, and some gene actors in a note worthy location. The popcorn will have to wait but this movie should be coming to a DVD outset soon. I give it 4 stars out of 5 (4 and a half with a tight edit).