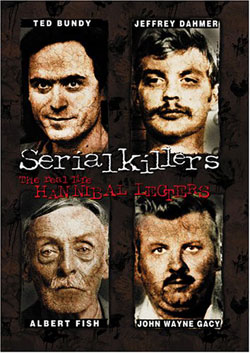 This documentary examines a selection of real life serial killers and compares them to the fictional Hannibal Lecter.

Dahmer, Gacy, Bundy… its a shame we know of these men so well as they are the villains of yesterday. No not the kind they sensationalize in film but the true sickos that society has spawned from its own cesspool of humanity. This latest release which at 60 minutes I would normally call a short film, is in fact a documentary. I believe fans of serial killer lore and psychology will enjoy this release as it delves into the minds of these men a bit more per way of analysis interviews. For instance, the release talks about early years, the influence of broken childhoods, a need for power, a breakdown in morale, the profiling, the statistics of areas within the states that harbor these men and the details of their crimes. As it’s mentioned, the idea of killing is nothing n new with several homicides on a daily basis. What does rise to the surface is the men who contnue to kill, increase body counts and keep at it for pure satisfaction on some level.

Cannibalism is discussed. Where the need came from in past cultures who used it as a war and conquer approach to tackling one’s enemies to religious interpretions that suggested the consuming of the whole being..soul and body. Though what we are looking today is more of a power drive that suggests that the men who indulge in cannibalism shortly after murder are somehow relating the process to building a more personal relationship with the victims. It’s explained that by consuming them they are making them a part of themselves.

As the title suggests, we look at the cinematic characteristics of Hannibal Lecter. Though psychologists point out that the on-screen profile of Hannibal would be incorrect as a psychiatrist and serial killer combination don’t ever occur in serial killer profiles. Also the sort of educated and wealthy background nature of Hannibal are not traits that often…. if ever fall into traits serial killers associate themselves to. Of course it’s cinema, so the truth is stretched for better character builds. Hannibal though does make the connection with his habit of eating his victims. This is the kind of details that are investigated per way of commentaries and expert opinions.

Darker avenues are featured as Dahmer’s crimes, court cases and confession are presented from the aspect of the victims families, and resident profilers. Though even with his horrendous crimes it still is not the last word on men of evil who act out on there inhibitions. Albert Fish will send shivers don’t your spine as his confession note is read and detailed. Andrei Chikatilo, a noted Russian sicko confesses to killing, eating, dismembering, and collecting pieces of his victims for later feats or to self indulge. His perverse actions included targeting the sexual regions of the body and consuming them. Notoriety runs abound with this collection of man’s best of the worst. The release gets you to thinking and really supports its visuals with plenty of clips, interviews, footage and audio embellishments. Probably one of the more haunting of these documentaries as it mentions aspects that may be too racy for normal network TV. At the end of the day, the real cases have served well in inspiring the cinematic fiction. But even with fiction….is the truth actually more disturbing?

Have we spawned the greatest serial killer yet? I personally don’t think so. As the formers are continually featured, analyzed and at the focal of programs like this…. we haven’t seen nothing yet. What has changed though in our system is the ability to track, profile and recognize the signs with higher technological methods. Certainly the ability to break down DNA is a major breakthrough in crime solving.