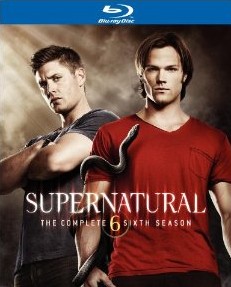 All Evil Will See the Light
SUPERNATURAL:  THE COMPLETE SIXTH SEASON

Contains All 22 Episodes of the Sixth Season plus Hours of Bonus Featurettes, Deleted Scenes, and Blu-ray™ Exclusives!

The Journey Continues on Blu-ray™ and DVD September 13, 2011

The prize: averting the Apocalypse. The price: Sam’s life. Season Five’s horrific finale left Dean alone, as Sam became trapped in Hell. Now a different man, Dean vows to stop hunting and devote himself to building a family with Lisa and her son Ben. Then, mysteriously, Sam reappears, drawing Dean back into the old life. But Sam’s a different man, too. He’s returned without his soul. How the Winchesters confront this latest challenge to their powerful bond is the troubled heart – and soul – of the profound and thrilling 5-Disc, 22-Episode Season 6. As the brothers struggle to regain Sam’s soul, they must also battle deadly supernatural forces. Demons. Angels. Vampires. Shapeshifters. And a terrifying new nemesis from Purgatory called the Mother of All.

6. You Can’t Handle the Truth

8. All Dogs Go to Heaven

9. Clap Your Hands if You Believe