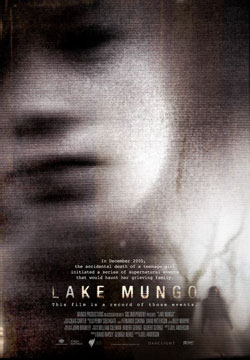 Sixteen-year-old ALICE PALMER drowns while swimming in the local dam. When her body is recovered and a verdict of accidental death returned, her grieving family buries her. The family then experiences a series of strange and inexplicable events centered in and around their home. Profoundly unsettled, the Palmers seek the help of psychic and parapsychologist, RAY KEMENY. Ray discovers that Alice led a secret, double life. A series of clues lead the family to Lake Mungo where Alice’s secret past emerges. Lake Mungo is a mystery, a thriller and a ghost story

If anything, 2009 seems to be a trend of reality tv turned fiction back to reality. And guess what? it also seems to be winning the awards for scariest cinema at the same time. Perhaps something about not knowing whether “what” your watching is fiction makes the idea of the supernatural all the more harrowing? So when I received the film Lake Mungo, I wasn’t expecting “that” kind of film. I suppose another – teens-camping-weird-mountain-man-stalking was the impression I thought the film might be. Well good news, its not! Though reality /documentary creep film it is.

So I looked up Lake Mungo to find what’s all the hubbub. The location itself is described as: Lake Mungo is a dry lake in south-western New South Wales, Australia. The film is also filmed in Australia, though the Lake is just a location used for part of the film. Quite a unique location if you ask me.

What the filmmakers did in this case was create another documentary based on fact that is all fiction. I didn’t know that…. coming into to it, which makes it all the more creepier. Though I must confess that when the credits rolled by at the end I was relieved when the names were played by actors. The story documents the occurrences around the death of Alice Palmer. One day while the Palmers were having a picnic by the local dam, they begin to worry when Alice never returns from the swim. An investigation goes into effect over several days and the body of Alice is eventually found per accidental death. Something about her body being pulled into the under current.

Her family grieves on tape for awhile before strange things begin to occur. Images, noises and even sightings of Alice begin to show up in weird places on camera. The images are found per the work of budding photographer and brother Mathew who begins placing cameras out at night to capture footage for review. We see Alice in video tapes and photographs often hidden or out of view.

The imagery that shows up heightens the film to that eerie stage that could have rested on its own as supernatural events. Though the story takes different turns that reveal the secret life Alice was hiding from others. Along the way we hear from family and friends on camera that describe her personality while being blind to the hidden facets of her life.

Ray, a local psychologist part psychic is brought into the mix to help the grieving mother. He performs a seance and tries different hypnosis tactics to uncover if Alice has returned from the dead to haunt their home. Many times you feel a sense of resolve as the film progresses that answers questions while introducing more. I got a feeling of looking under the magicians cloak only to discover that what was revealed was only one layer of many.

In a sense, the film does an interesting thing. It builds up, lets down, relieves and then builds up again. For this reason “Lake Mungo” is quite a interesting and intelligent movie that knows how to keep its audience glued to the activities and facts presented.

This film was selected as one of the entries into the 2010 8 films to die for. “Lake Mungo” was directed and written by Joel Anderson. Joel has directed one film prior titled: “the Rotting Woman”

Lake Mungo is sure to pull you into its believable arena of a ghost story, both smart absolutely brilliant. If anything of a trend emerged from the 2008-2009 circle of filmmaking it’s the notion of real horror combined with factual fiction that dives straight for you gut.