In Spring Grove, a local mob boss, Paul Varlo, decides to use a highly experimental and volatile toxin to exterminate a witness who is going to rat him out to the feds. He instructs one of his hired thugs to put it into the man’s water supply. But the poison backfires and creates a zombie outbreak. Soon Spring Grove is overrun by fast zombies with guns! As fate would have it, a down on his luck, small-time criminal named Jake has to transport a priceless heirloom to Varlo and he and his girlfriend, Laura, arrive just in time to face down the zombie apocalypse. Jake and Laura side with a small band off survivors who struggle to survive and escape the zombie horde.

Really, the title says it all: Fast Zombies with Guns. That’s what they’re delivering here – everything else is window dressing. These zombies – and they are legion, everywhere and in vast numbers – are faster than the zombies in Zack Snyder’s Dawn of the Dead (2004) and Danny Boyle’s 28 Days Later (2002) and they’re armed. If they can’t catch you – which they usually do – they’ll just shoot you down first. The idea alone sets the tone for the film, and the movie embraces it. It’s a zombie-mob movie, no doubt about it. Everything about this movie screams low budget: the acting, the directing, the effects and the music. It tries to keep a straight face, but has a hard time not becoming what it is: a campy, zombie-fest. C’mon, it’s Fast Zombies with Guns!

The movie is full of problems, most of which can be accounted as budget and inexperience. The acting and the plot are ridiculous. At least it’s honest though and not difficult to watch. Even when they’re a flat as can be, the cast of Fast Zombies with Guns still manage to define their characters clearly – even if sometimes it’s with the broadest of strokes. Everyone seems to be having a great time and it’s infectious, which benefits the film greatly. When the film is accepted for what it is, the performances are perfectly fine and a number of them stand out: Jake with his annoyance toward his girlfriend and Will the Vet who wants to save all those around him. The script and dialog don’t help either, especially when the actors deliver lines like “Is it going to hurt? There’s a decent chance you’re going to sh*t your pants.” and a deadpan “How bad is? You don’t wanna know.” But the film is really about those pesky Fast Zombies with Guns! 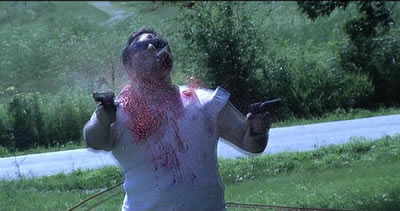 So if it’s not the characters and actors, it’s gotta be the zombies, the special effects and the gore. Right? These zombies are as low-grade as the come, they’re not much more than make up and a few pasty appliances here and there with some blood splatter to sell it. There a lot of them though and that’s quite impressive. Fast Zombies with Guns has hundreds of zombies zipping along, munching on the cast during its run-time. They come in all sizes as well: big, small, young, old, even kids – all completely blood-thirsty and all armed. Everyone wants to portray a zombie on film and this movie proves it. The effects are well done for the budget. Blood spays freely from wounds and foaming zombie mouths. And there’s an enormous amount of squib work with both zombies and fleeing humans getting shot in the legs, heads and backs. It’s over the top and silly. Only when they creators have to resort to a few CGI effects does it betray the spirit of the film. There’s one particular zombie munching scene that exemplifies this film: in the scene, the zombies pull off a victim’s leg to begin munching on it when blood sprays madly from the gaping wound, so much and so furious that the zombie actors are caught shielding their eyes and hiding from the blood splatter.

When watching Fast Zombies with Guns, the titles says it all and spells out clearly what to expect. For that, it delivers and little bit more. The beginning is a little slow and the action doesn’t begin to make sense until the very end. It has a large cast for such a low budget film and more zombies than three or four typical zombies films. It’s not very good but it has spirit and a delightful sense of fun. It’s hard to hate on the film even with its many and varied flaws – it does what it sets out to do; it entertains. What more can be expected from a crazed zombie flick called Fast Zombies with Guns? And where do these zombies get their guns? Honestly, it just doesn’t matter and somehow it works. 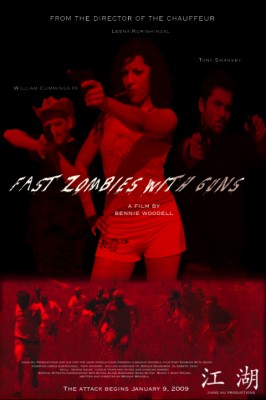