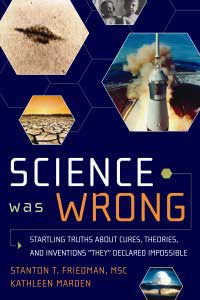 Can it be true? Is everything that we are fed not based on truth and does politics and agendas hold the real truth and motivation behind what we are led to believe? You betcha! Though those of us who are pro-active readers, have known that now for quite some time. However, its not too late to distill more facts and what they have led us to believe over the years. Authors Stanton T. Friedman and Kathleen Marden have put together an overview of select studies which also suggest that this book could be the start of several.

The topics covered include Global Warming, Psi controversy, Hemophelia, Smallpox, Jupiter, Aviation, Communications and Cold Fusion to name a few. It’s not a controversy book per se and not a science book per se…..its a bit of both with explanations on certain individuals and claims made and how they have been disproven, changed or even acknowledged after the evidence was too much to not acknowledge. Sadly many have lived and died that have spent their lifetimes trying to convince others on what they knew of suspected only to fall upon death ears at times. This book looks at a few of those men and women. Was it so absurd that the cause of so many child deaths and child birthing sessions was as simple as keeping good hygiene and washing one’s hands. Believe it or not, this used to be an absurd notion that only makes too much sense these days. What about this global warming crap…..was this much publicized concern just a snowball to push forward secret agendas and party interests? Did it fall forward the way they projected it would? Is there a sense of truth to it as well. Much of that is covered with some pretty intriguing factual evidence that suggests differently.

The last chapter of the book goes more into he scifi stuff with documentation on UFO’s, psi phenomenon and abductions. Even if medical history is not your bag, this chapter will fulfill that extra-ordinary interest in your reading.

Hey remember the days of when flying was declared as “not possible”? Did the military invest too much into research that was simply solved elsewhere by 2 men who know better. The Wright Brothers did it on their own despite what the critics were saying. Space Travel that would never happen? How about misconception about the surface of Jupiter or even the age of our galaxy for that matter? I think its evident that times are changing and while some things were dead on, some were just wanting to be blown open with new discoveries. A fascinating book that offers a nice variety of material that readers can skip to chapters of interest or consume in one sitting. I think there’s a bit of re-educating that was intended in this publication that will fall nicely upon enthusiasts intellects that will also maybe provide some great dinner talk chatter. The book is well suited to science buffs, historians, and those who teeter on knowing elements of Fringe with new discoveries. Not overwhelming and still suited to many.