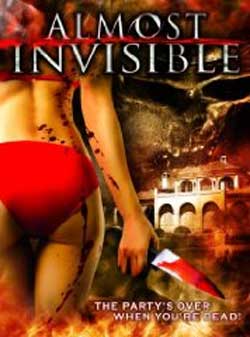 A group of your standard cliché college students are looking for a place to party for the weekend when they are suddenly offered a chance to party at April’s house. It doesn’t phase the group of coeds that none of them have ever really hung around with April, nor does the girls neogothic wardrobe. The kids don’t even notice when objects start to move around the house on their own while they are partying, its only when the house won’t let them leave do they take notice; and by then it’s too late.

“So we can just party harder than we usually do!”

Okay first off David Allingham’s Almost Invisible is a low budget film, and it is hampered with cgi effects (some of them down right great and others not so good). It is full of unknown actors and the editor of the film really liked to mess with reverse effects. Some of this can be a hamper while trying to enjoy the film but if the viewer does give the film a chance one gets a great retelling of one of the oldest ghost stories in the book, with a modern twist and lots of young naked flesh.

Almost Invisible starts with the nakedness not even three minutes into the film when the viewer is tricked into thinking that they are watching yet another low budget zombie flick. It is revealed that the flick is actually a student project (thank god) and the viewer is immediately introduced to your usual cliché of horror film monster fodder. There are the bitchy pretty girls (who spend most of the film wearing bikinis), the sensitive guy, the stoner and the jock heavy drinkers. The group discusses what they are going to do for the weekend when token goth chick April lets the group know that her parents are out of town for the weekend and they would be more than welcome to party at her house. This peaked my interest as a fan of the Night of the Demons franchise immediately I was excited…a little too excited.

The kids all wind up at the house and start to party and do things that only stupid young kids do, like getting in an outdoor hot tub during the middle of a thunderstorm. They drink and get in “light saber” duels with each other, and even attempt to cook an egg in the microwave. The partying kids don’t even seem to notice that their host April is constantly watching all of them perched up all creepy style on the roof, or that things are moving around on their own, the fire place pokers are turning red hot and burning the carpet. None of this is caught by the group; in fact Mr. Sensitive is too busy following April around when he sees her trying to get a hook up.

The partying continues until the microwave blows up, then the kids start to notice and they start to be a little more destructive in their partying. Things are broken and eventually April tells everyone the party is over, there is just one problem…..the house doesn’t quite want to let them leave.

Almost Invisible jumps around a lot and it does contain some pretty creepy sequences including ghosts getting into bed with party goers, the slut of the group deals with her own promiscuousness in quite a damaging sequence and a pretty creepy scene involving the television. All of this is combined with some twisted flashback sequences and some good jump scares that do make the film an entertaining trip through the haunted house genre.

Almost Invisible doesn’t just focus on the scares though, sprinkled throughout the film is quite a bit of humor, mainly coming from a young couple who are running late to the party and seem to want to spend more time with each other. That’s not to say that the group of partiers in the house don’t get their share of the humor though, for instance when every clock in the house starts to go off, something that would frighten most people I know, the stoner of the group gets really excited saying that “it sounds like Pink Floyd”.

The payoff for Almost Invisible however is the very end and I cant mention it, lets just say that yes you will probably see it coming from a mile away, but you will still think to yourself…”wow I remember that story!” I think the concept behind Almost Invisible was a great idea, and the casting of young women in bikinis for ninety or so minutes was also a fantastic idea. The over use of cgi however just eventually did wear on me, same with all of the editing fx. Had the film been a straight up telling of the story I think it would have turned out a lot less confusing and easier to follow.