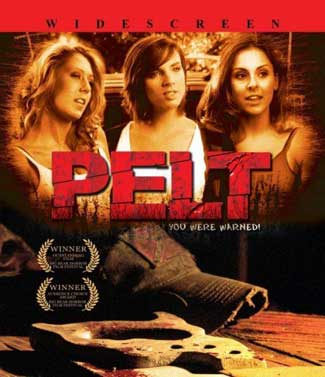 A group of friends on a camping trip make a huge mistake when they decide to ignore the “Private Property” signs (when will people ever learn?) and trespass onto an area of woods in the middle of nowhere. They soon regret their decision however as the creepy, backwoods guy who lives on the property soon begins to dispatch the group one by one in a series of increasingly violent and painful ways. Will anyone survive the killer’s brutal wraith to enjoy another camping trip every again?

Pelts” is a nice little throw back to 80’s slasher flicks and I had a blast with it. Is it original at all? Hell no. Did I care? Hell no. It is just a fun little slasher flick featuring your usual group of cliché people being cut to pieces in a variety of ways by a madman who lives by himself in the middle of nowhere. I wasn’t expecting anything new or original when I popped it in my DVD player, but since I grew up on these kinds of movies in the 80’s and would rather watch a good slasher flick over any other type of film I wasn’t too upset. I thought that it was a great little movie and I believe that many slasher fanatics out there who hold a special place in their hearts for the likes of “Just Before Dawn,” “The Final Terror,” and even the original “The Hills Have Eyes” will absolutely love “Pelts.”

I think that one of the things that I really enjoyed about this movie was the fact that it didn’t take itself too seriously and there was some humor thrown in to go along with all the violence and bloodshed. The humor is not too over the top and is pretty subtle for the most part, but unlike crappy mainstream films like the horrible “Scream” or “Scary Movie” franchises the humor here is actually funny. I am not saying that you will fall in the floor laughing hysterically at every attempt at humor and there are a few times that the jokes were painfully bad, but for the most part I think that most viewers will find themselves chucking at the majority of the stuff that is supposed to be funny. I have to give kudos to the writers as they do a good job of going from silly and funny one minute to deadly serious the next.

Another thing that really made this movie work was the fact that it had some very great characters that I cared about. Yes, most of them are cookie-cutter and your usual cast of characters that you see in slasher flicks like this one (we have the drunk, the good girl, the hot nymphomaniac chick, the oddball, and even the token black guy, etc) but I didn’t really mind. I mean come on, who watches a slasher flick for the deep character development anyway? Like most slasher fans, I watch movies like “Pelt” to see the characters get decapitated, cut in half, and killed in a variety of clever and fun ways. Even though the characters from this movie are as just about as cliché as you can get, there is still something about them that I liked anyway. I can’t really put my finger on it, but for some reason I really cared for these guys and didn’t want some of them to die, especially the hot sex addict chick and the big black dude who walked around for most of the movie wearing footie pajamas with baby chickens on them (seriously).

The death scenes were pretty good and while I had already seen most of them before in other movies I still enjoyed them nonetheless. As a matter of fact, there was something about the first death scene that just reminded me of a similar death scene in “Friday the 13th Part 5 (most people won’t know what I’m talking about here I’m sure, but I think that there may be a few folks out there who make the connection).” The killer is a pretty brutal bastard and I liked the fact that we never really get to see him up close. I also liked that he didn’t have any sort of back story at all and just seemed to kill people because he enjoyed doing so. Too often killers are given some sort of horrible back story to explain their actions and most of the times these motives are just silly and unnecessary. I appreciate the folks behind “Pelt” didn’t feel the need to go into a lot of detail about the killer, as I think it makes him more ominous and creepy due to the fact that we don’t know anything about him.

I really had a great time watching “Pelt.” I highly recommend it to others out there who share my love of the slasher genre. As I said, it may not be the most original movie but to be honest I really couldn’t have cared less. The ending leaves things open for a sequel and I hope that we get to witness a “Pelt 2” sometime in the near future. Check it out if you run across a copy of it, I think you will really dig it if you give it a chance.