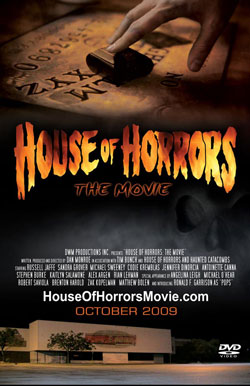 A group of Haunted House employees get trapped inside the “House of Horrors”… Western New York’s largest and most terrifying haunted attraction. Terror ensues as an excommunicated Priest searched for a possessed Ouija Board within the confines of the Haunted House

I’m always on the look out for a cool film from Buffalo to arrive on the scene in a land where films are being shot all the time. While the level of material ranges from good to crap, it was definitely nice to see a well written, and shot interdependent film come out of the area. This one is titled “House of Horrors” which also uses its famed haunted attraction as part of the movie set. Of course this wasn’t the first Buffalo haunted house film to arise from that area as the film “FrightWorld” was shot not too long ago ….Though without going into detail on it. Fright World was a miserable failure of an idea. House of Horrors though reclaims the throne as a confidently shot horror film that makes great use of its sets.

The film begins with a bang as some careless teenagers unleash the devil into the world per an innocent game of call upon the ouija board. Usually that’s all it takes to release some form of diabolical entity as we remember quite well from the “Exorcist” era. This board though seems to host evil within it that ends up in the hands of a local priest. The priest (sorry forgot the name) goes on to become possessed and becomes the “apostle killer”. Without giving all away, its fair to say that the board makes its way around which eventually leads to a slasher film scenario and one busy haunted attraction. The story in fact begins to branch out in the concept.

For on one hand we have a board that just influences evil and evil actions. On the other hand we have a masked serial killer figure that is possessed or driven by the boards evil. This notion helps to bring a bit of fun into the mix. The killer takes out haunted attraction workers in various and sometimes inventive ways. For instance running a taped tube into a victims mouth and filling it with his own blood to drown the victim. They also don’t hold back on blood usage and merciless kills. A quality that is good to see on low budget ventures. At least it shows inventiveness from the filmmakers not to “just” resort to slash and run scenes which could otherwise become boring. Points also go to the camera work that makes good use of the haunted attraction props and narrow corridors.

As the film was nearing its end… I actually had a revelation that they could of ended the film with the kills becoming part of the attraction making it even more realistic that what the designers started with. That idea is hinted at but not taken into its potential conclusion. An odd addition was the use of a paranormal team who provide a slight nod to comic relief but who’s main purpose was to measure the high supernatural readings that the team were receiving from back at base. I took this as a story support idea to enhance the fact that the ouija board was influencing the evil and supernatural scenes that later unfold.

In looking at the extras, it is revealed that the team went with in a high definition camera for the filming. The extra cost though pays off as it brings a nice professional look to the project. Also I was glad to see that the director often used mobile and non static shots to give some depth, rather than always mount and shoot scenes. The area I thought could of used some help was in the impact moments when the killer lurches out from hidden places. The timing and shots were right on, though the sound effects needed a boost to startle the audience. What resulted was a “potential” for a startle moment but not enhanced enough with proper audio backup.

What I was impressed with was the choice of shots, cuts and perspectives used in the film construction. Everything followed a well organized script that really didn’t leave any holes/ This is always a concern on these productions that shoot and piece later. Though House of horrors did what it set out to do.

Special mention goes out to our own Michael O’Hear who played the smaller role of Father Michaels. Michael provides reports from Buffalo per his column “From the Night shift”. He also holds his own as a competent actor who delivers on his scenes like a pro.

House of horrors was the brainchild of Writer / Director / Producer Dan Monroe who should be proud of his debut achievement. HOH stands as one of Buffalos crowning horror films and best to come out of the area in the last 10 years. Well produced, solid and great horror film at that.